This is my Spring 2014 (April/May) Davis Mountains astronomy pictures page.  I have posted a number of dark nebula pictures from the trip here.

Here's the first time-lapse; day to night with the Milky Way.

Here's maybe a better time-lapse; day to night to day, with a big dose of the summery Milky Way. 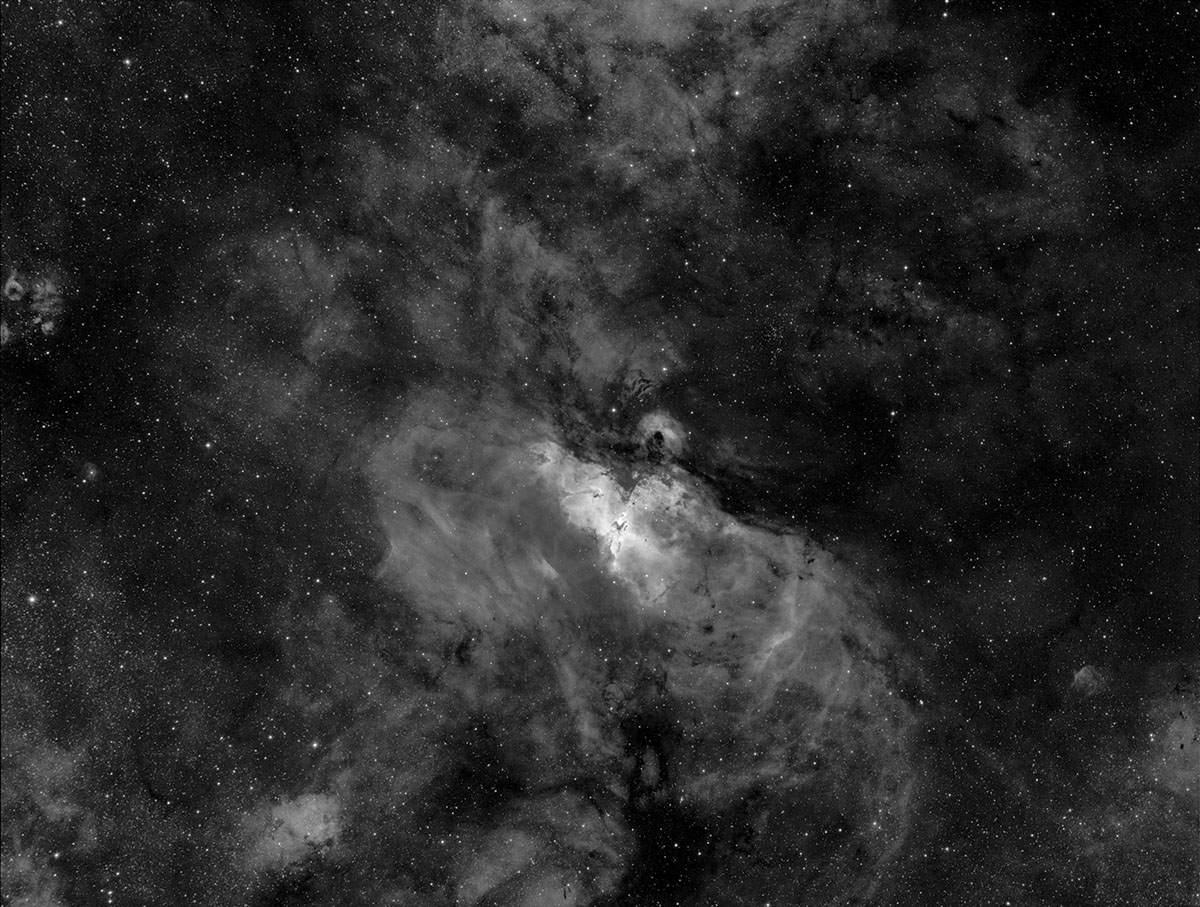 M16, The Eagle Nebula in H-alpha

This is the pillars of creation area, see more pictures and details about this area of the sky on my primary Eagle Nebula page here.  The above consists of 25 total exposures of 5 minutes each using an H-alpha filter.  I will eventually combine this with the other H-alpha image at the previous link.  Details: SBIG ST-8300m monochrome camera and the Takahashi FSQ-85 telescope with reducer (328mm focal length) from the 2014 Davis Mountains trip.  My equipment rides on the AP 900GTO mount.  My processing techniques are discussed here. 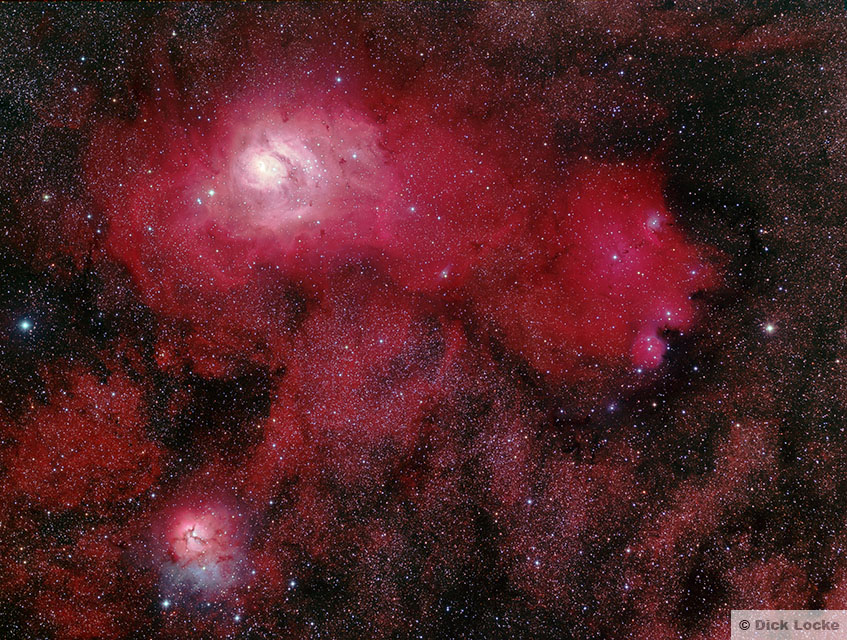 This page has a larger version of the image, along with details of the capture & object. 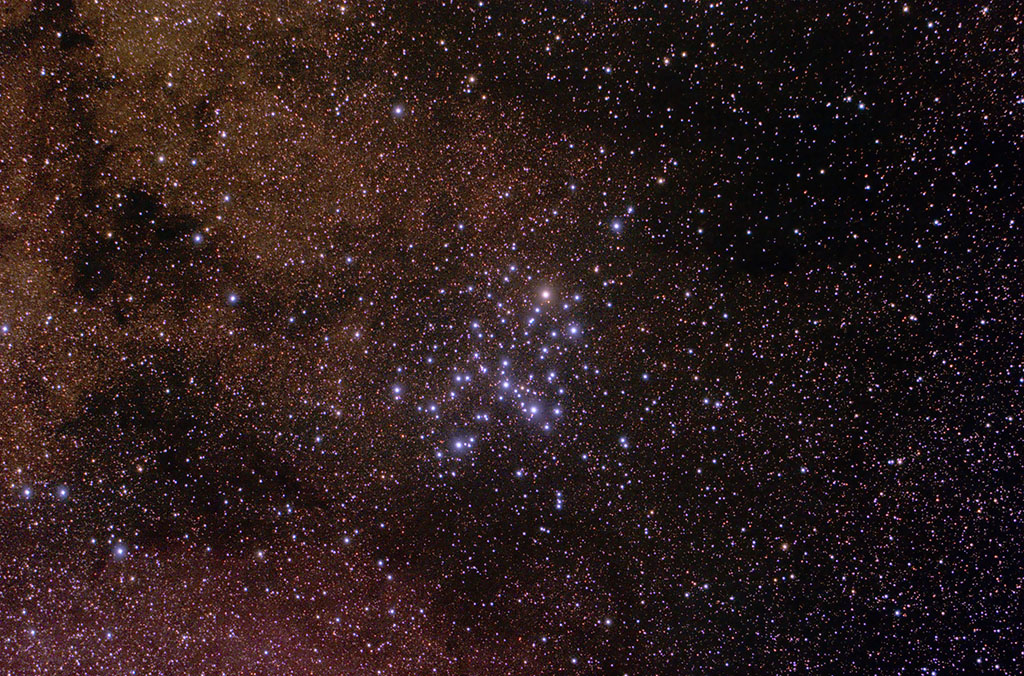 Details for the image above are on my M6 page. 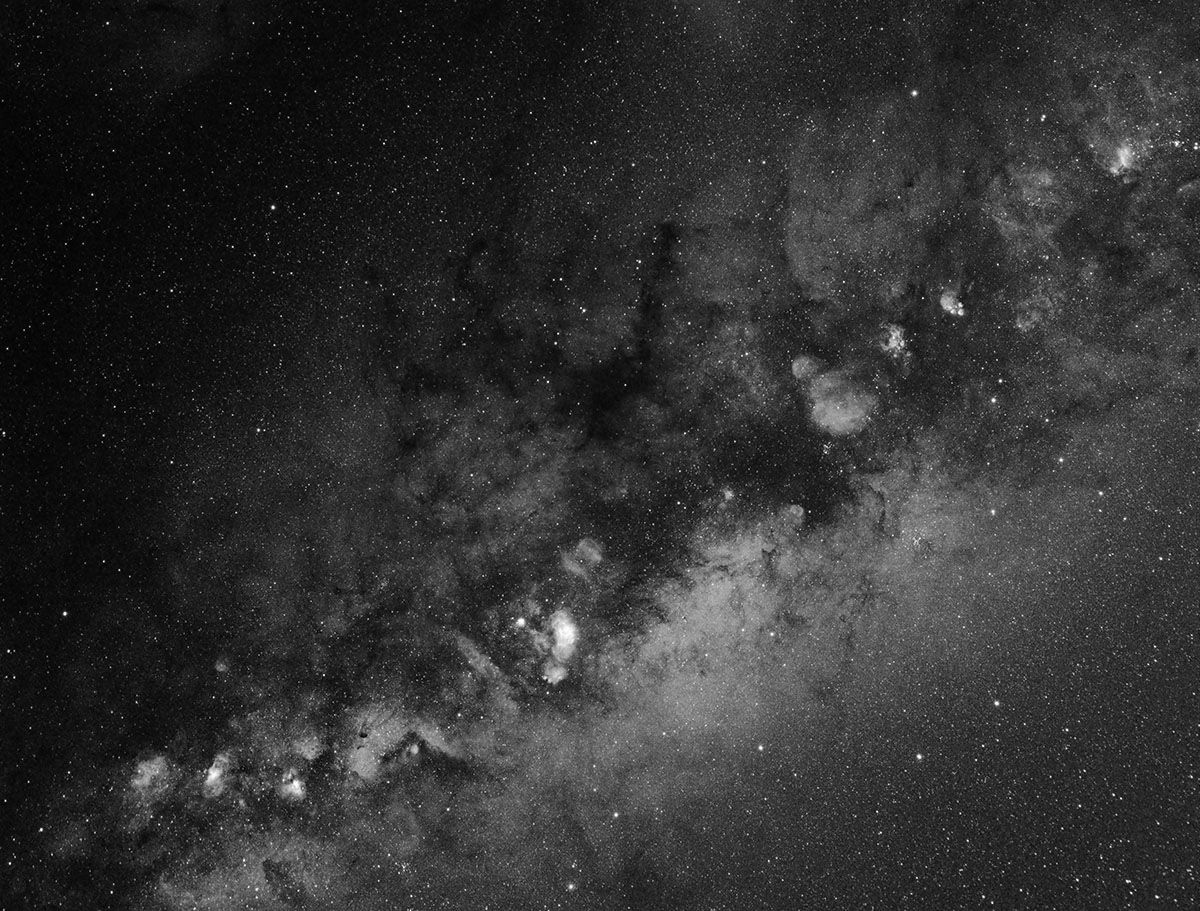 Saturday night 4/26/14 was forecast to be extremely windy (20+ mph) but clear, so I decided to try imaging with my Nikon 28mm lens attached to the SBIG ST-8300m camera.  The image above consists of 27 5-minute H-alpha frames at f5.6.  See below for some pictures of the equipment setup for this image.  My equipment rides on the AP 900GTO mount.  My processing techniques are discussed here.

Color images of this area and object IDs are on my dedicated Milky Way & Star Cloud Area Milky Way pages. 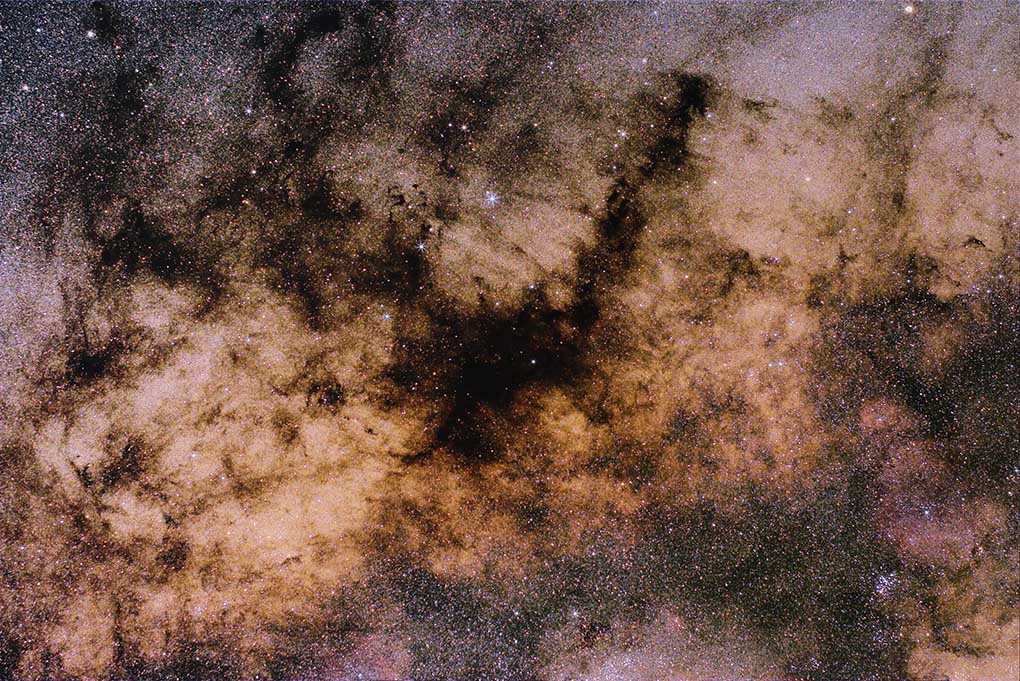 On this trip I spent some quality time on the dark nebulae in the pipe area.  The above consists of 15 frames with the Canon 20Da & Canon 85mm f1.8 lens at f4.5.  Details on my Pipe Nebula page. 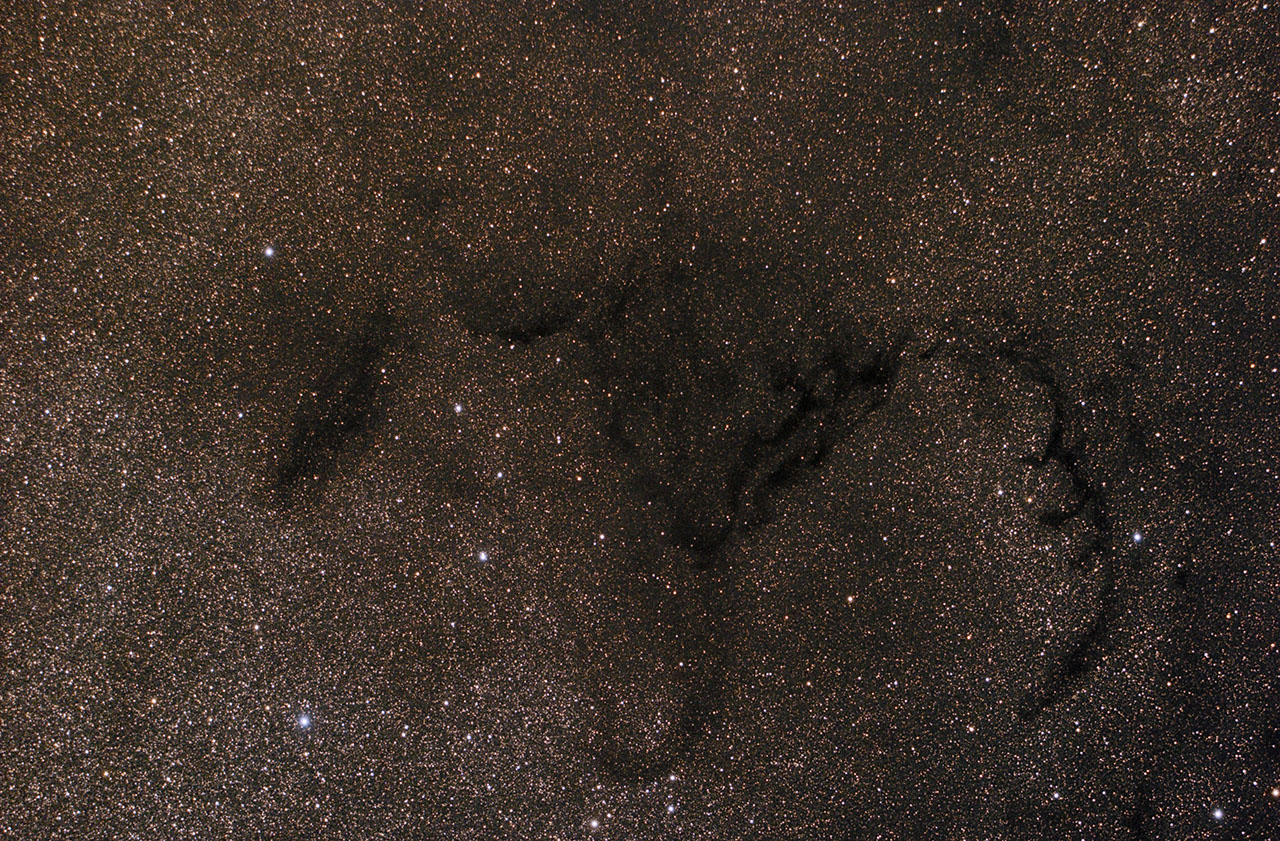 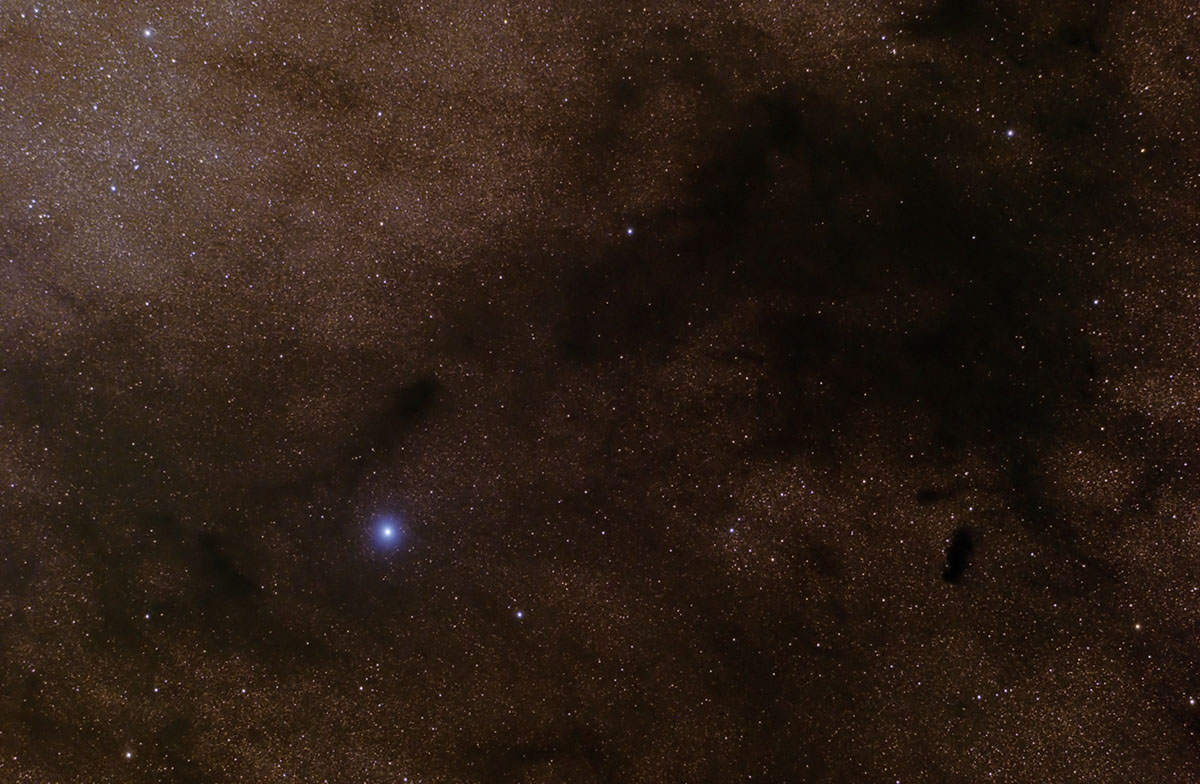 This is the area around the bowl of the pipe nebula.

Thinnest Moon Yet:  I was able to catch my personal best thin moon on this trip, click here to see it on my thin moons page. 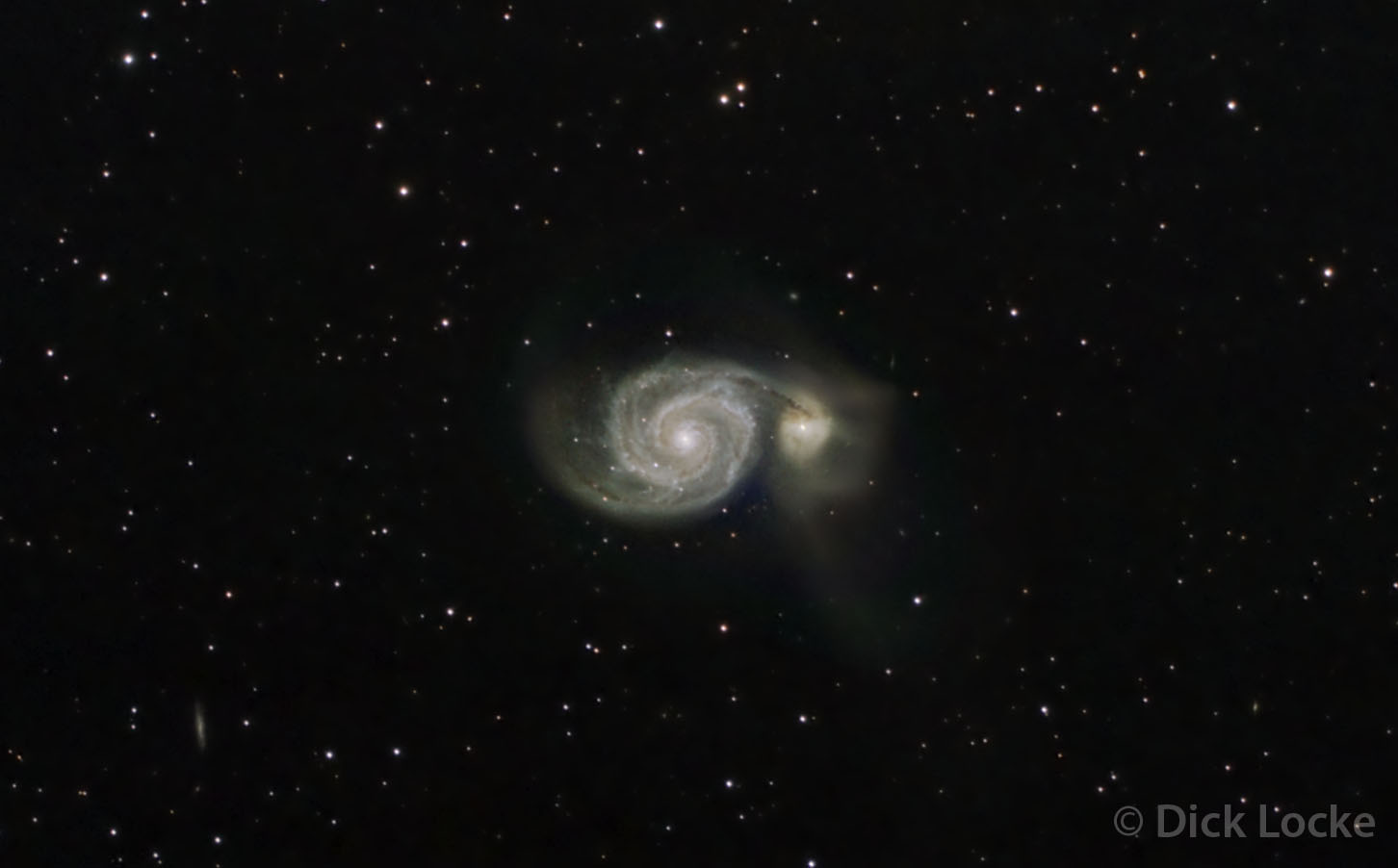 A late edition to this page; see my M51 page for more info. 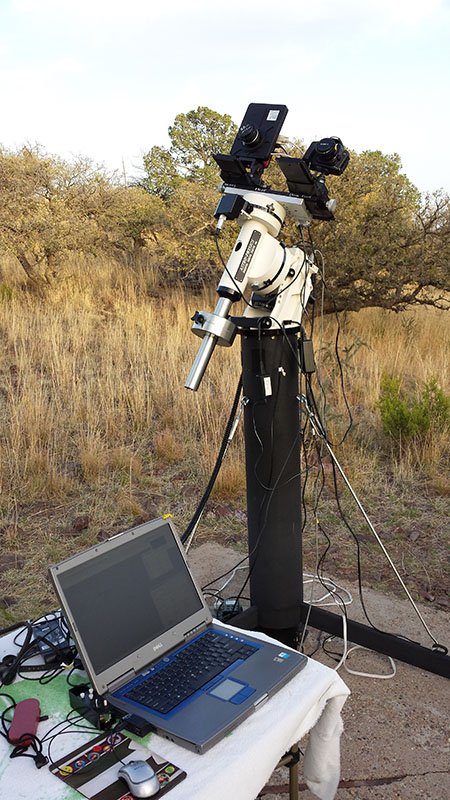 This was the setup I used in an attempt to image in 20+ mph winds.  It withstood the high winds pretty well; 28mm is a very forgiving focal length. 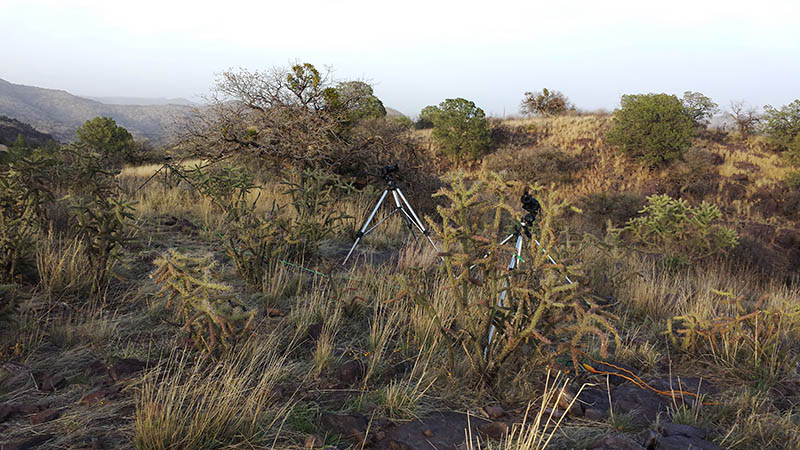 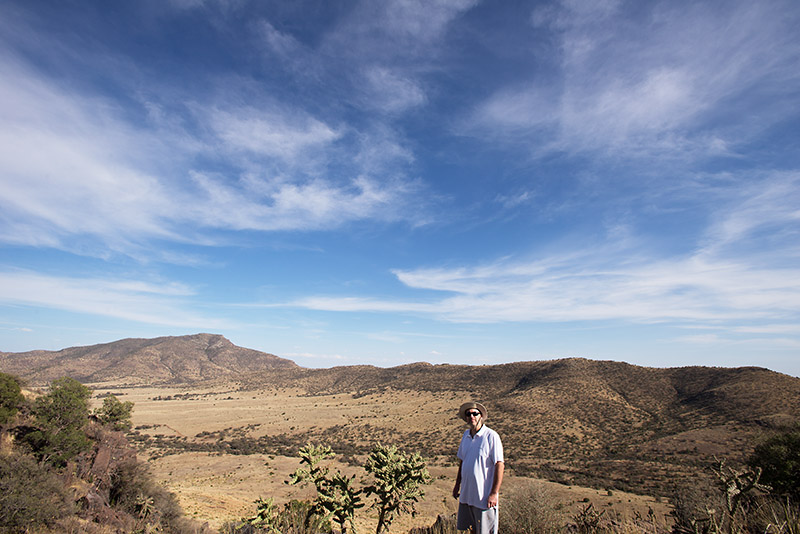 Yours truly with Blue Mountain in the background. 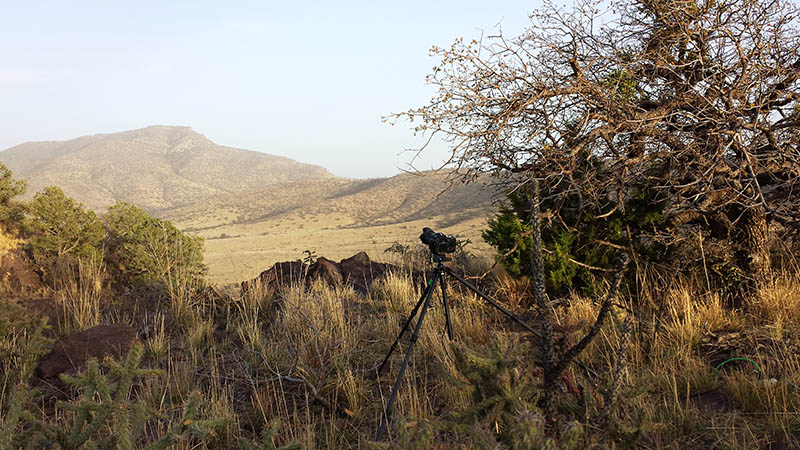 If it looks a bit hazy that's because it was...  Days of high winds and blowing dust impaired transparency for much of the trip. 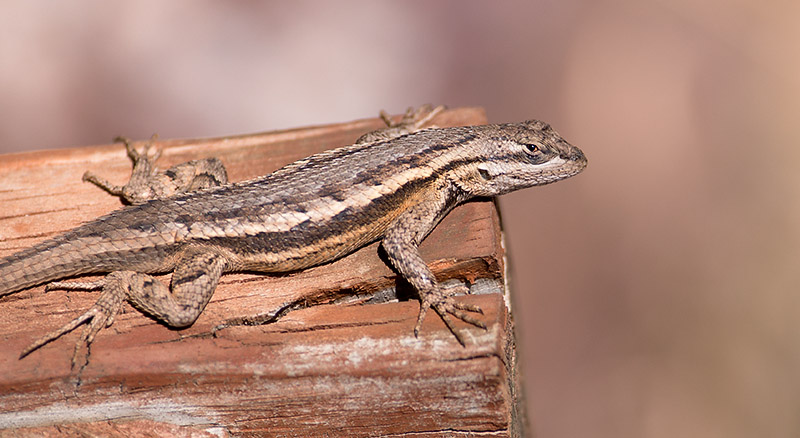 This guy hung out on the front porch during sunny periods on this trip. 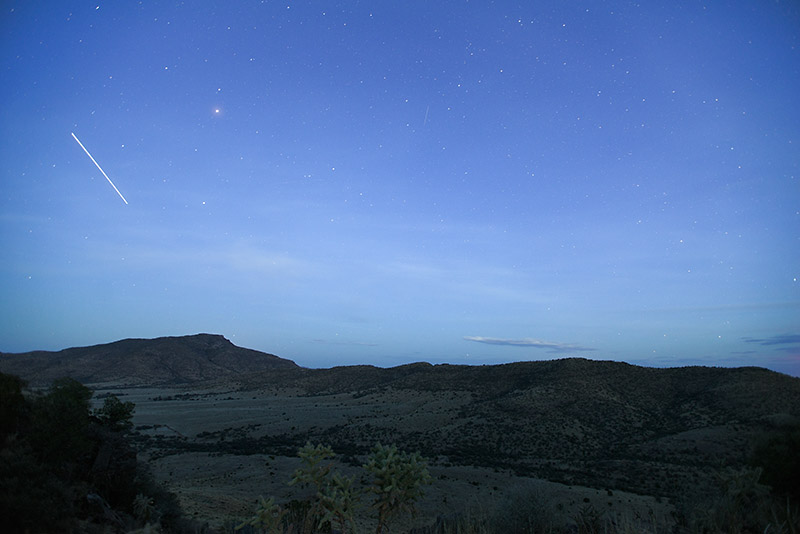 I caught this very bright ISS pass over Blue Mountain just as darkness was settling in.  As a bit of trivia, Blue Mountain is listed at 7287 feet (corrected 7/14) tall in wikipedia. 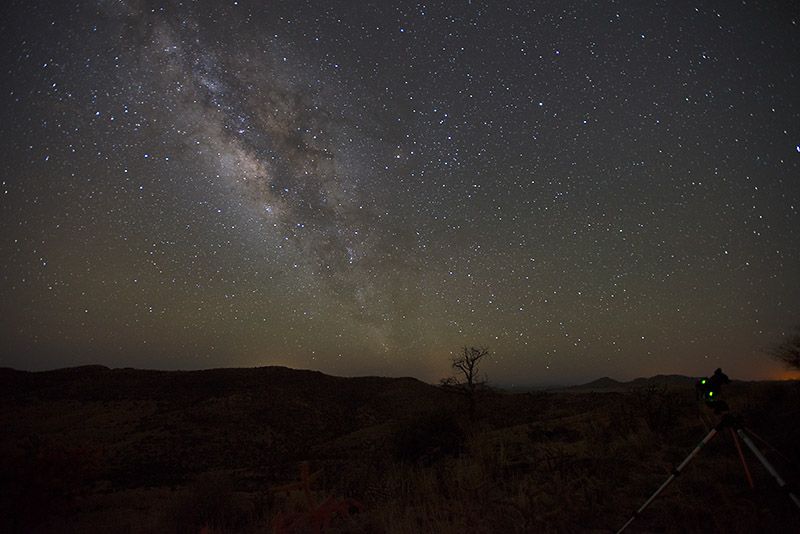 This is one frame from a camera shooting time lapse looking south towards morning.  Another time lapse camera is on the lower right.  Note some ground detail is visible by the light of the stars & planets, notably Venus which was up during this shot.  Nikon 17-35mm f2.8 lens (at 17mm wide open), Nikon D610 Camera, 30 second exposure.  This camera rules in low light! 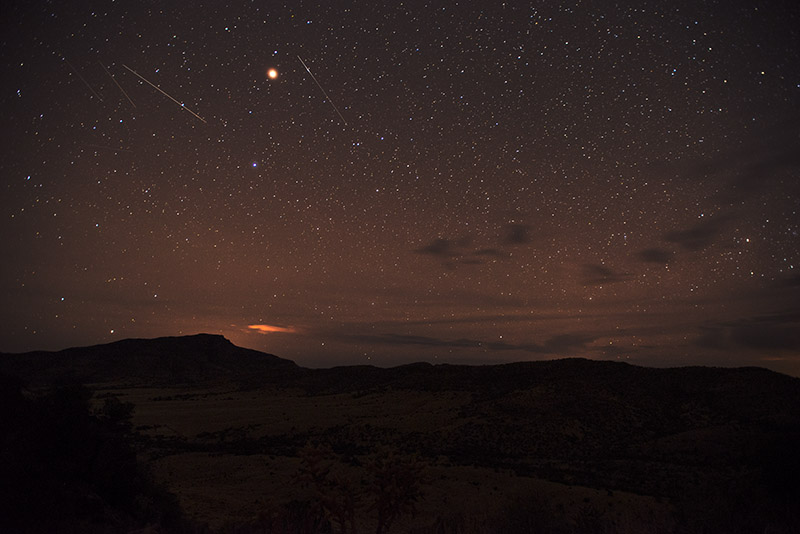 Can you see all 5 satellite trails?  The faintest is below the left two trails.  The extremely bright object is Jupiter 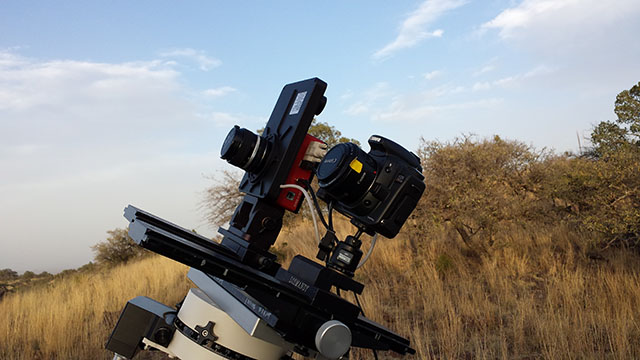 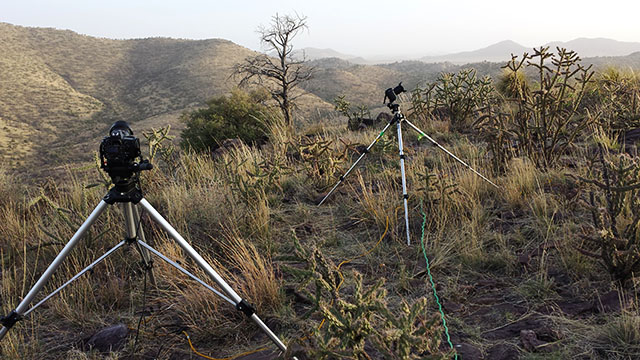 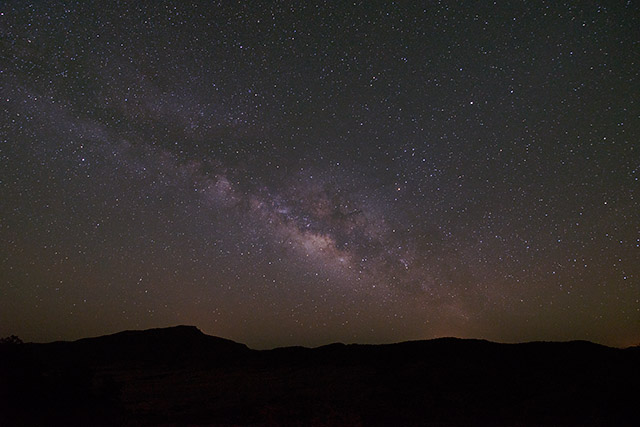 Below: Some trip and weather notes for my reference:

I decided to take an extra day off work, Thursday, based on the weather forecast.  This proved to be a good decision on that Thursday was the best of the first 4 nights.  It doesn’t get dark until after 9:00 or so in late April in the Davis Mountains, so I had plenty of time to get everything set up and aligned.  Spring is galaxy season, so I decided to re-do M51 while I waited for Antares to rise around 2:00 a.m.

The first night of these trips is brutal; after a 10.5 hour drive, and a 2-3hours of set-up, it’s my normal bedtime as soon as things get going.  Powered by coffee and adrenaline I baby sat everything until I was sure it was working, then took a 70 minute nap.  After that it was work until dawn.

Wind forecast so bad I decided to not bother imaging through telescopes.  Instead I broke out the SBIG Nikon lens adapter and attached it to the SBIG 8300m.  This involves changing out faceplates that connect to the camera.  They’re held together by 4 screws, so it’s a bit of a deal but not too bad.  I had problems with achieving focus with another lens via this arrangement in indoor testing, so was wondering what would happen in a real world astronomy test…

As might be expected, it didn’t work at night either.  I was able to determine that the lens was too far away from the camera.  It was cloudy in the early evening and very windy (20-30mph) when I was testing so this was a good time to debug.  I brought everything inside and searched the internet for an actual picture of the setup I was trying to achieve.  No luck.

I was able to determine that the camera adapter was two pieces, the plate and camera connector itself.  The way the plate and connector were fastened together they stuck out a bit from the camera; my theory was if they could be switched it was logical that could fix the focus issue.   The plate I removed, that worked, was kind of recessed into the camera as well

The two parts in question were connected by very small allen screws.  Digging through the tool kit I thought it was a good omen when the first wrench I found fit perfectly.  It was encouraging that everything went together the other way, and I was pleased to find out the after the change focus was achieved easily.

So the question is, did I put it together wrong, or did it come that way?  Not sure right now ;-)

Sunday (Internet mostly out since midnight)

Whoa, here's the forecast for today:

I knew it was windy but dang! It blew over my old camera doing time lapse; no apparent damage ;-)  Gotta set that one up (it's on a lighter tripod) lower to the ground next time!

Internet out Saturday night but was on very briefly Sunday – long enough to check in with my wife & get the weather forecast.  Worked on processing images.  The 20Da had a lot of issues with hot pixels removed via Nebulosity’s dark frame.  Tried bad pixel maps, worse!  Onto major noise reduction techniques…

Very windy Sunday, knocked over my old camera on a light tripod.  I was prepared to do the wide angle lens imaging thing again, but very poor transparency from 11:00 to 2:00 a.m. & called it a night at that point.

Rest Of Today Sunny. Very windy. Cooler. Areas of blowing dust. Highs in the lower 70s. West winds 25 to 45 mph with gusts to around 70 mph.