M16, The Eagle Nebula and Pillars of Creation Area by Dick Locke
Copyright © 2004 -2014 by Dick Locke.  All Rights Reserved.  Contact and Image Use Information 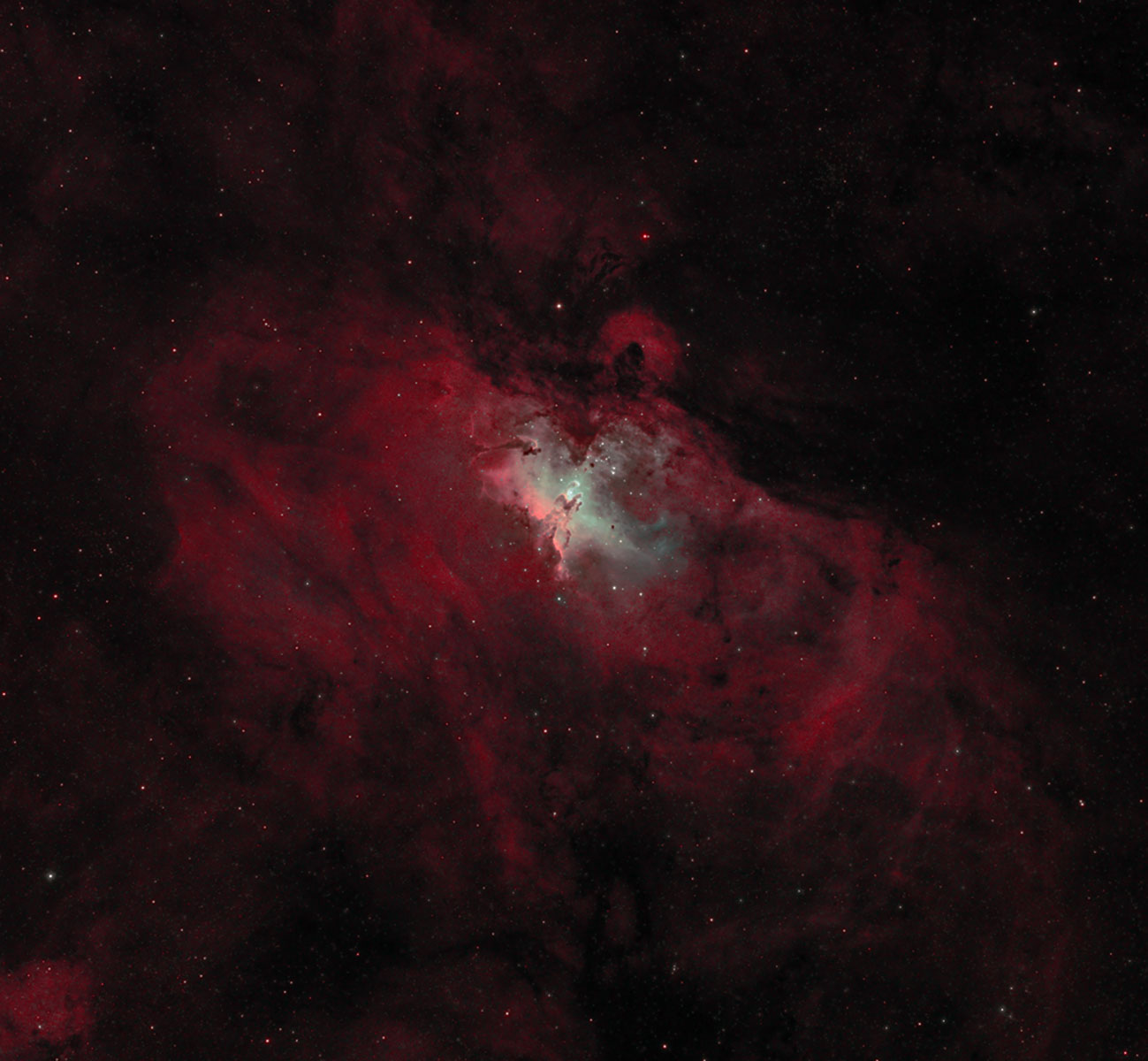 M16, The Eagle Nebula in Serpens Caput, is where the famous "Pillars of Creation" live.  Can you see where they are, above?  See the Hubble APOD of M16 here.

Processing Notes:  I used the "natural color" formula referenced at the bottom of my narrowband imaging page, but blended the H-alpha very strongly into the luminance to help make up for the weak O3 and SII exposures.  I also used a layer mask to blend in a darker and more contrasty center image to avoid blowing out the very bright center area.  More processing details for the natural color from narrowband technique is on my astrophotography image processing page. 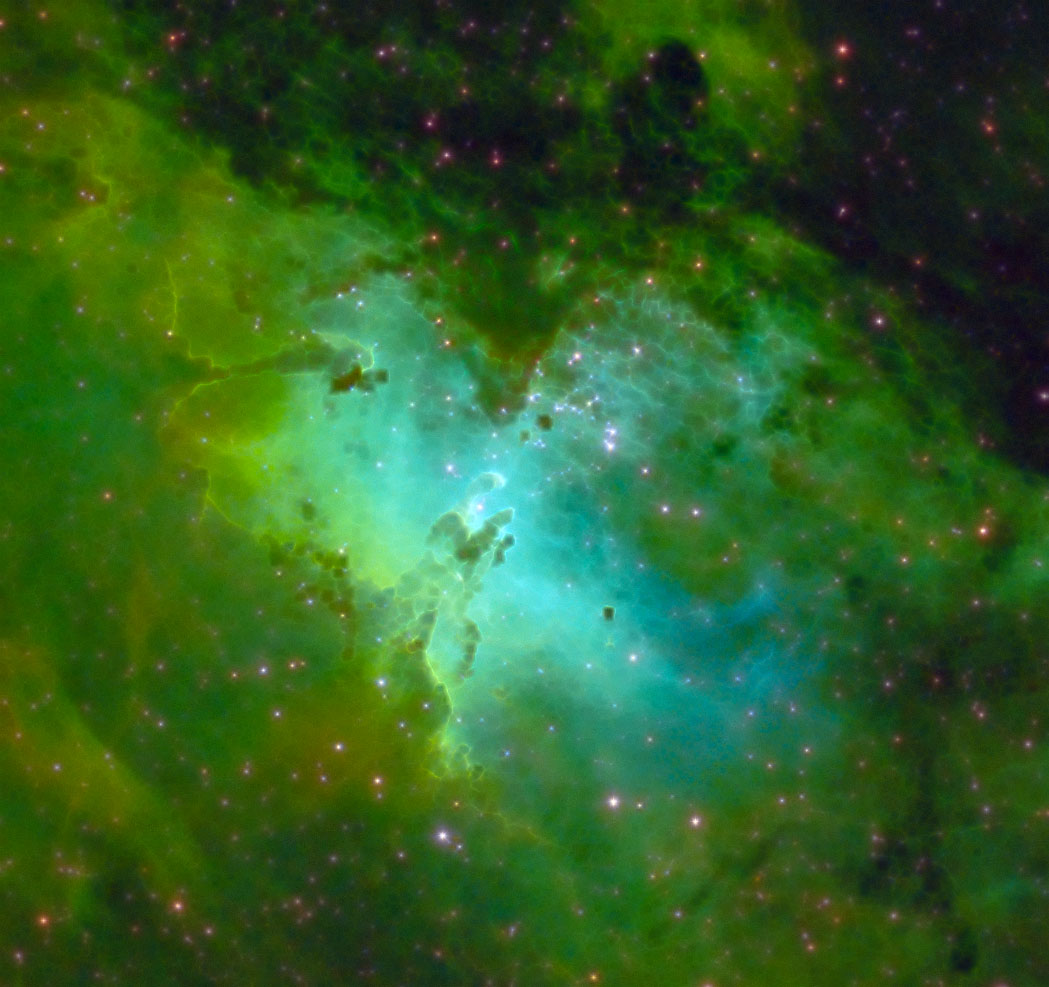 Same data as above, but with the colors assigned per the Hubble Palette.  I did some HDR toning in this on 11/23/14 & posted that update - going for the gaudy vs. the subtle!  The HDR toning did enhance the detail somewhat.

I doubled the size of the pillars area just for fun; this was the most interesting view of the data in this palette.  The Sulfur & Oxygen are relatively weak and a lot of smoothing was needed in the red & blue. 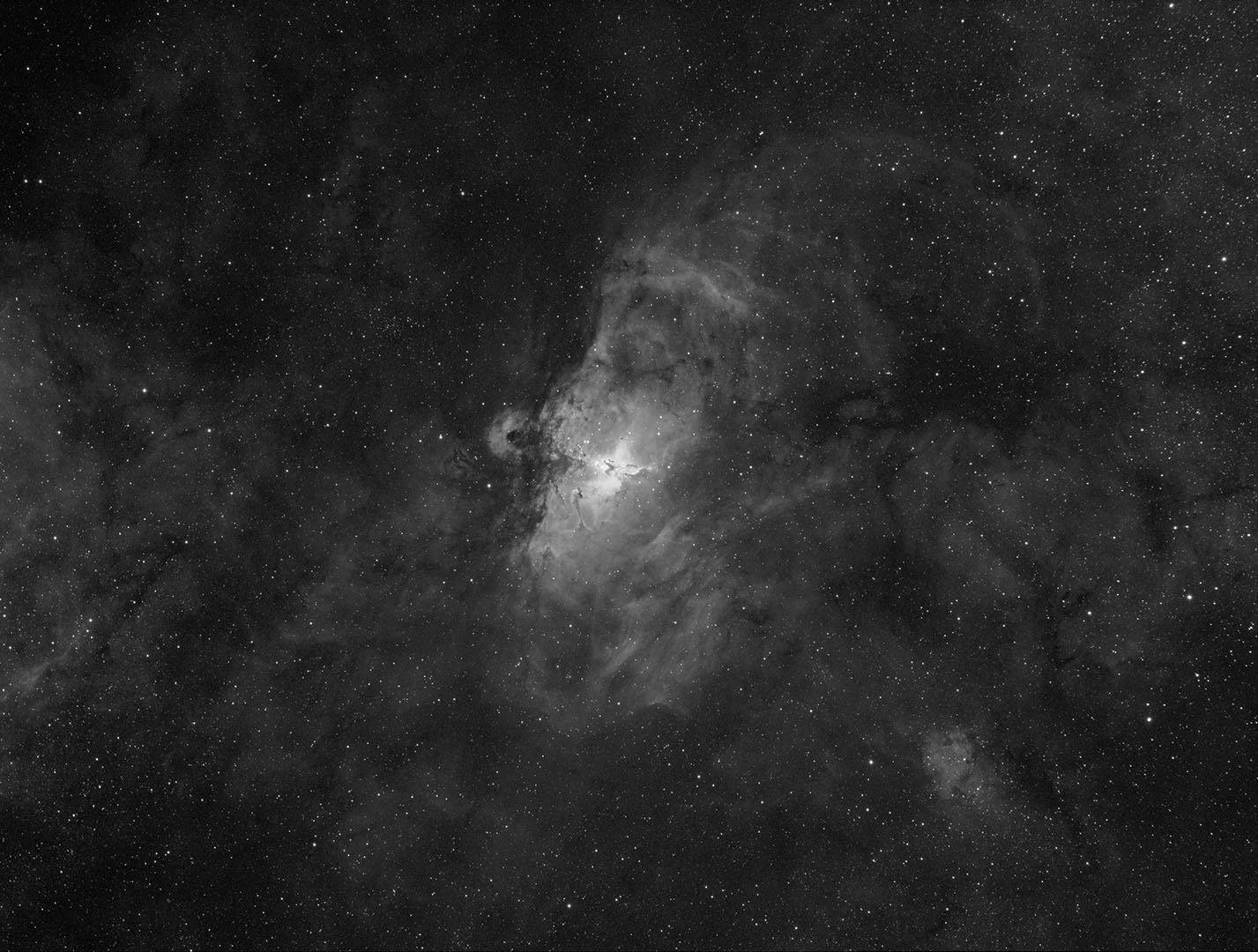 Pillars of Creation Area in H-Alpha

The dim H-alpha present in this area is fantastic.

Image Information:  13*5 min (65 min) H-alpha from the Fall of 2013 at Starry Nights B&B.  The images were captured and processed via my typical image processing methods described here.  Equipment: SBIG ST-8300 CCD camera with the FW8-8300 filter wheel, Astrodon narrowband 36mm filters, the Takahashi FSQ-85 telescope with reducer, AP 900GTO mount.  Not much exposure and less than ideal skies, but a fabulously rich area.  I also shot M16 during my Spring 2014 Davis Mountains trip and there's another monochrome image of this area at that link. 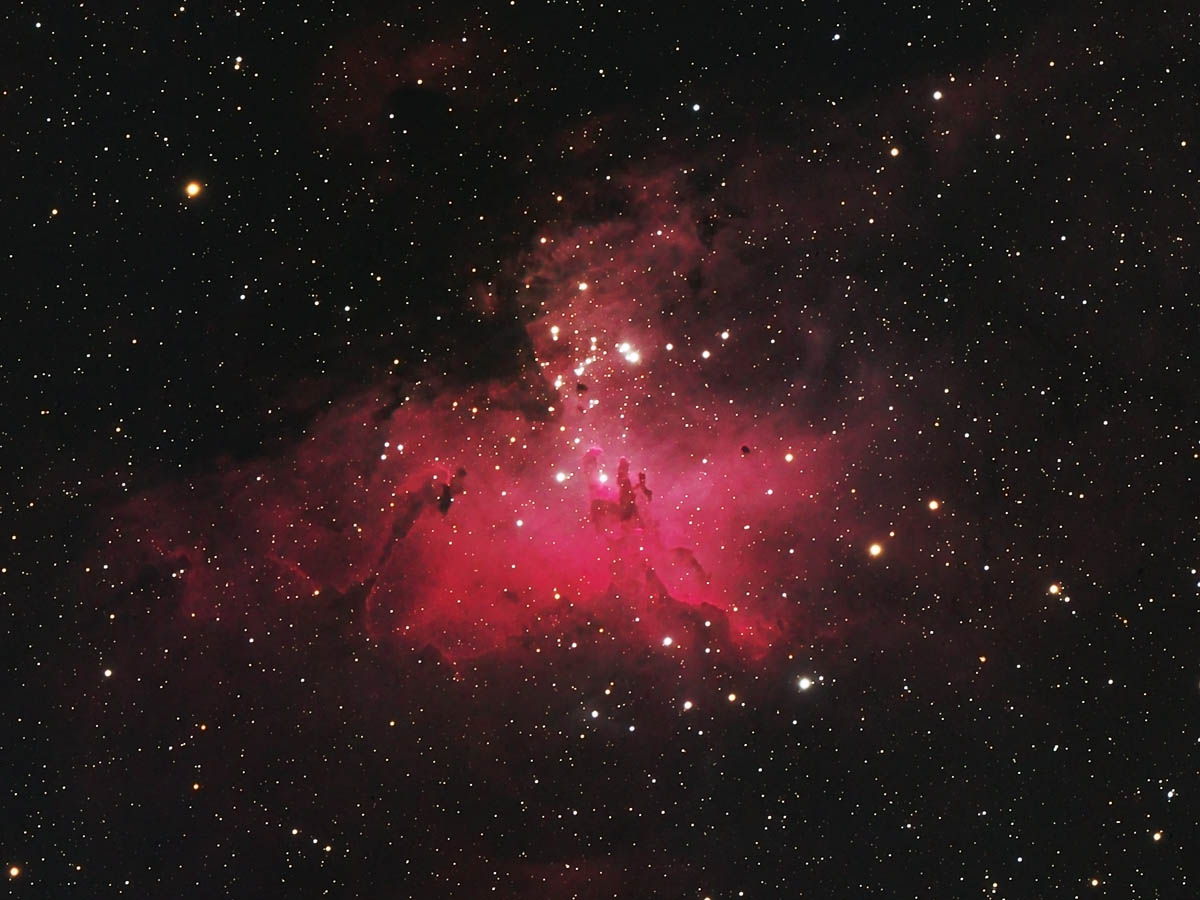 Above: Reprocessed in 2009, this time using just the 4.3 hr DSLR exposures from 2007.  This time I used the ImagesPlus Star Size and Halo Reduction feature to shrink the stars, reprocessed, and cropped.  My standard and advanced image processing techniques were used. 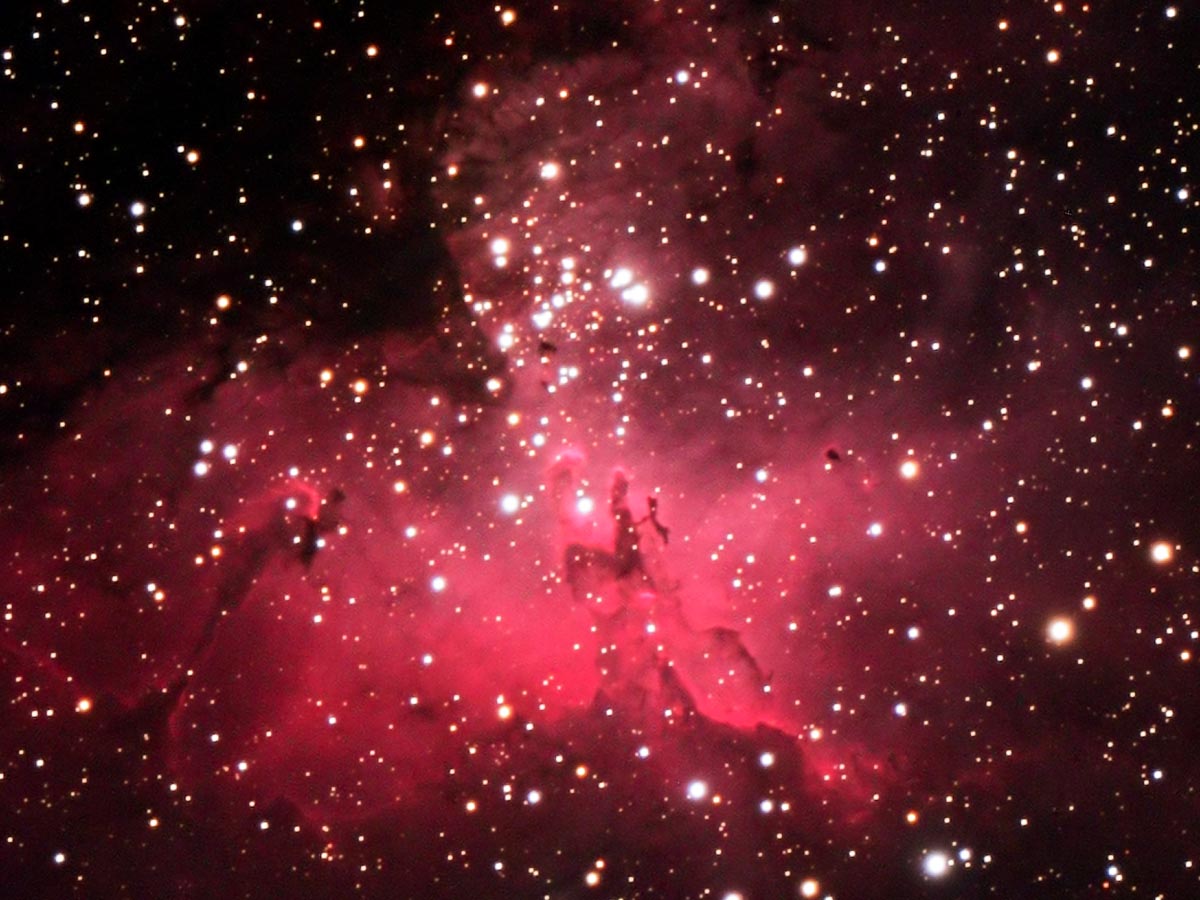 The stars are pretty fat in this older image, especially as compared with the newer narrowband images above.  This image adds 65x4 = 260 minutes (4 1/3) hours to the image below.  The latest shots used the Takahashi field flattener.  All the pictures from Sept. 2007 trip are here. 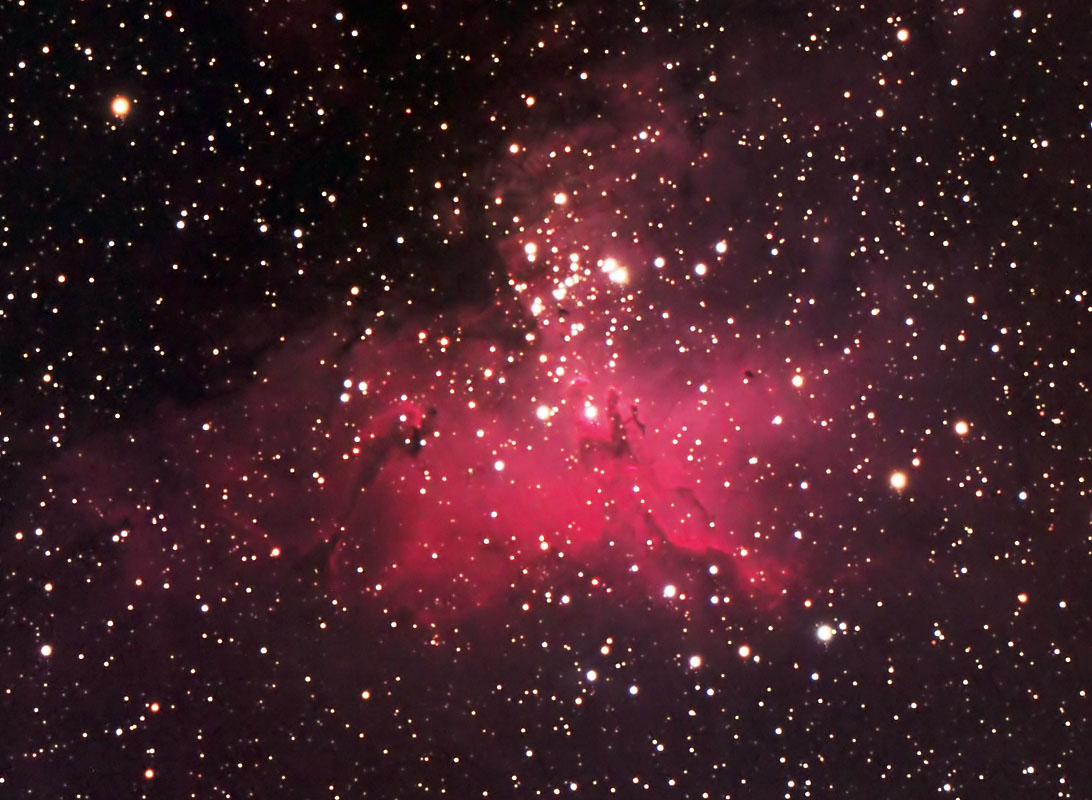 
Prime Focus New Frames: shots from the HAS site near Columbus night of 8/11/2007.:  ~23x4min = 92 minutes exposure at 800 ISO. Temps were around 79 F most this night, which is a major disadvantage when using my uncooled DSLR.   Object was low in the sky once again.  Canon EOS 20Da (unmodified), ISO , Takahashi TOA 130 (a 5" APO refractor), and Astro-Physics AP 900GTO mount. The image above was composed of new images as described, plus the DSLR images described below.. 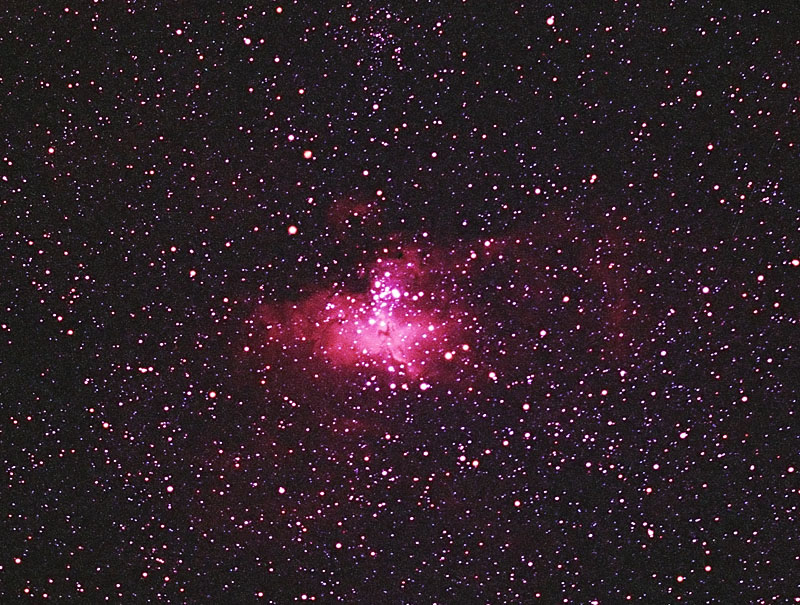 Notes:  Obviously this is an old film image.  Life is so much better 10+ years later with digital sensors!

This is about a 50% crop of the full frame, resized to 800 pixels wide.   I apparently didn't have the EQ head locked securely locked to the tripod this night, as the next night I was able to shoot I discovered that it was loose.  I'm not sure if this contributed the the slightly out-of-round stars.  I would have liked to go a bit longer on this exposure, but clouds rolled in at 4:00 a.m. and sent me off to bed.  This is where the famous "pillars of creation" image from the Hubble is from; they zoomed in on the detail that's hinted at in this image..

Check out the single DSLR image at only 5 minutes, compared to 45 minutes above!!!  (at very bottom of page)

Copyright © by Dick Locke.  All Rights Reserved.  Contact and Image Use Information