Check out the new 2013 versions of the interstellar rose below.  If you'd like to see some close-ups of the Rosette's core and the Bok Globules click here. 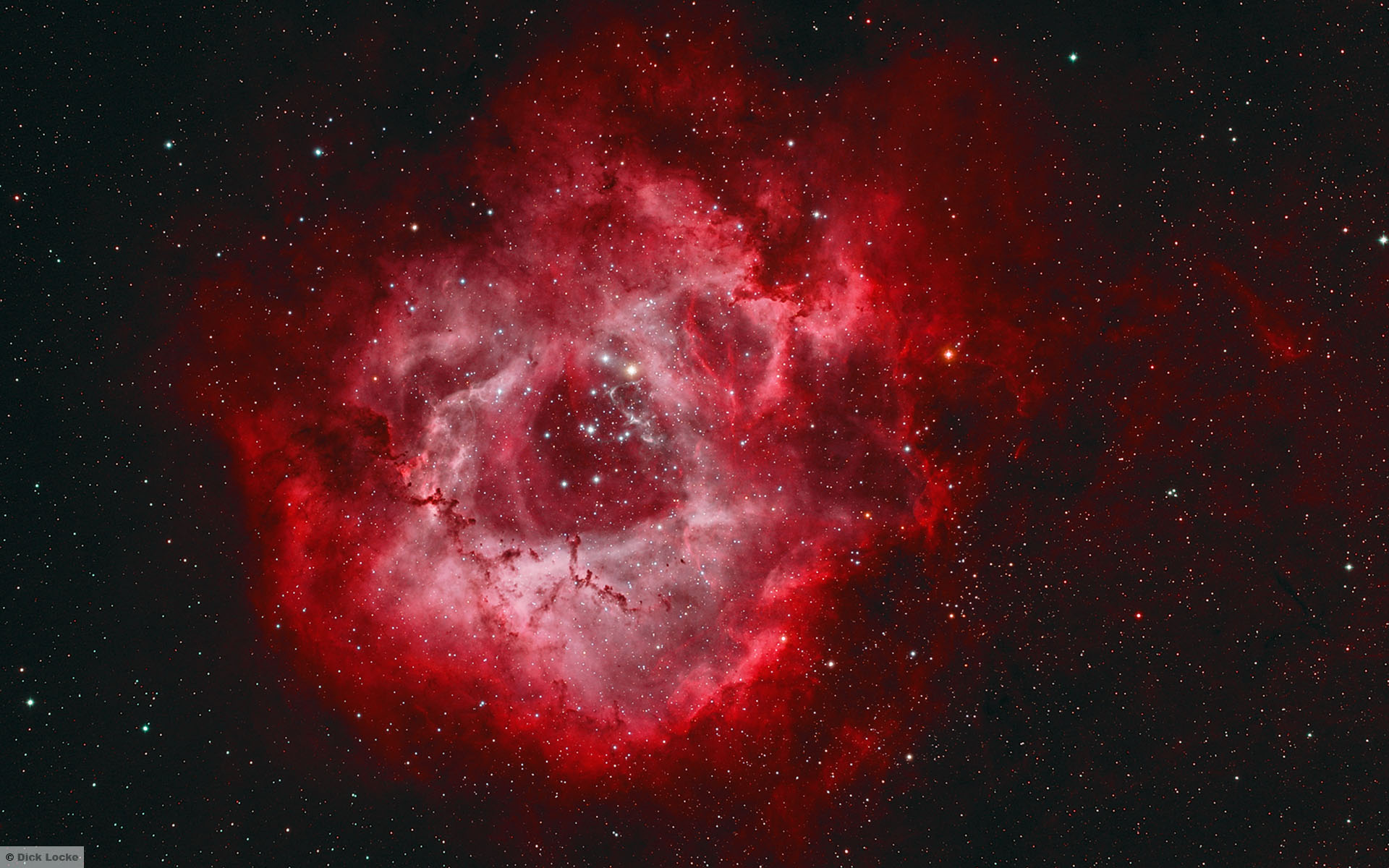 Rosette Nebula Information:  Located an estimated 1,500 light-years from Earth in the constellation Monoceros, the Rosette Nebula is a spectacular region of ionized hydrogen excavated by the strong stellar winds from hot O- and B-type stars in the center of the young open cluster NGC 2244. It is a region of on-going star formation with an age of about three million years.  Some good info about the Rosette is at SEDS here.   This area is rich in hydrogen alpha wavelength emissions.

The image above consists of ~ 15 hours total exposure through a variety of cameras and telescopes.  There are 75 * 5 minutes narrowband and 62 * 5 minutes of "One Shot Color (OSC)" data, along with 5 hours of data from 2010 and before.  Narrowband data (30*5 min Ha, 30*5 min OIII, and 15*5 min SII) from SBIG ST-8300m monochrome camera, narrowband filters, and the Takahashi FSQ-85 telescope with reducer from the 2013 Davis Mountains trip.  The skies were not entirely cooperative in 2013 so I'm short on the Sulfur exposures!  The OSC was captured with the TOA 130 telescope with reducer and QHY8 "color" CCD camera.  Everything rides on the AP 900GTO mount. 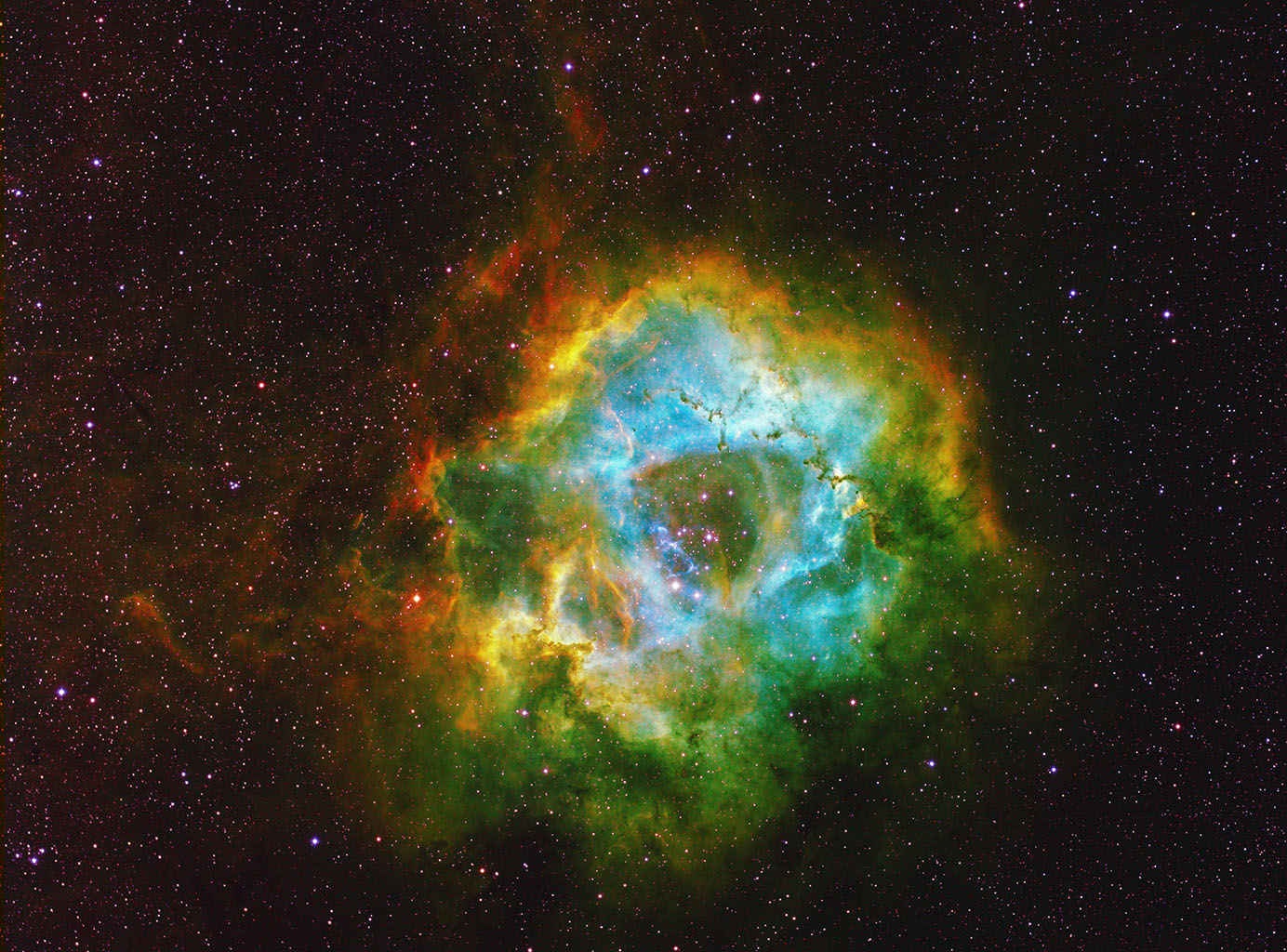 The image above uses the “Hubble Palette” to construct a color images from monochrome data obtained with narrowband filters and my SBIG 8300m camera: R= Sulfur, Blue = Oxygen, and Green = Hydrogen Alpha.

Image details: 6.25 hours total (30 Ha, 30 O3, 15 S2 frames of 5 minutes each) using SBIG ST-8300m monochrome camera, narrowband filters, and the Takahashi FSQ-85 telescope with reducer riding on the AP 900GTO mount from the 2013 Davis Mountains trip.  The skies didn't allow me to get the S2 exposure I really wanted, so the red is a bit rough. 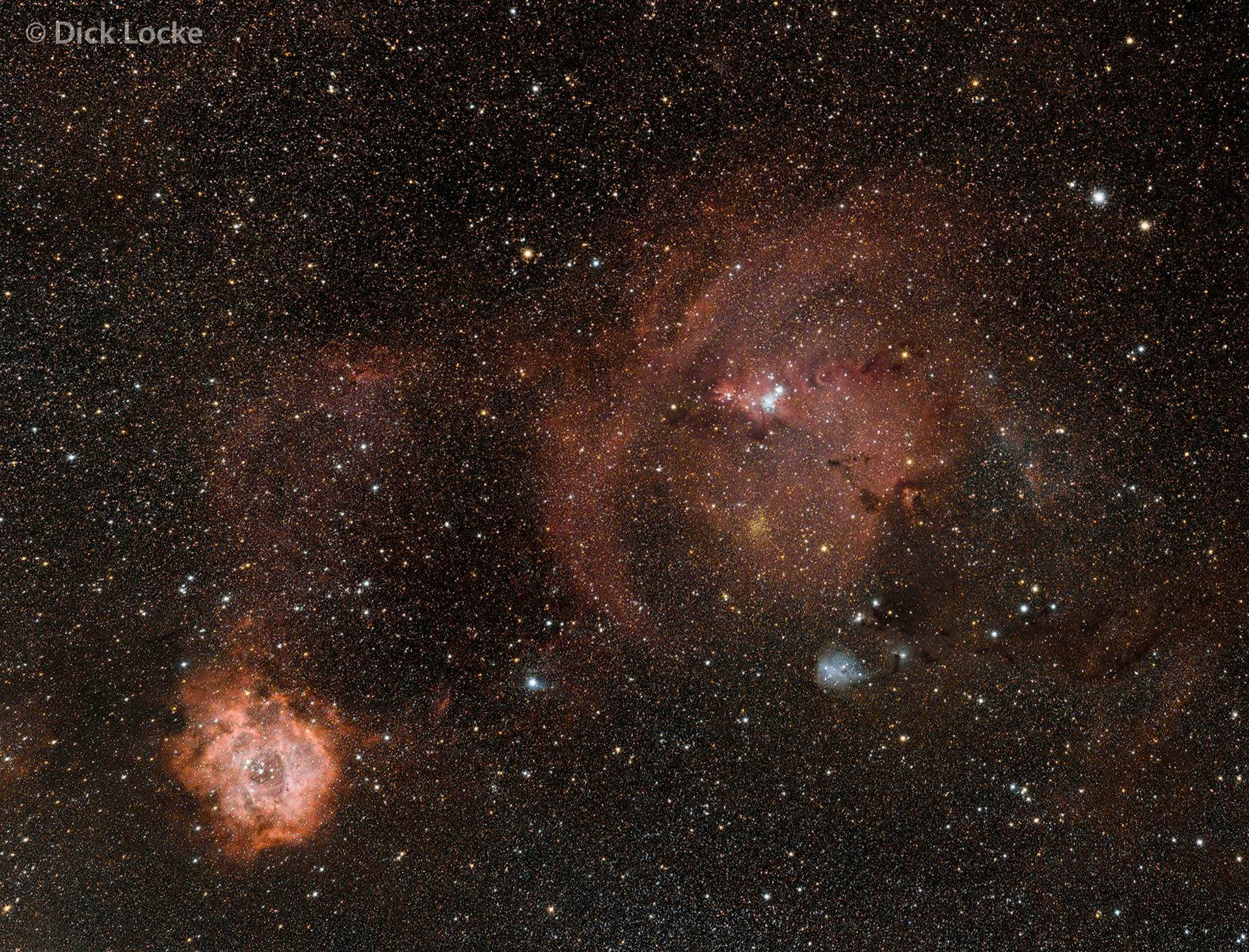 This is presented in a large (1920 pixel wide) image to show detail.  The Fox Fur, Christmas Tree, and Cone Nebula area

Rosette Nebula are represented.  Trumpler 5 is the yellow-ish cluster below the cone area, and below and a bit to the right of that is

IC 2169.  I used some of my regular processing techniques on this, but this image represents my first foray into PixInsight (PI).  I used several PI tools, but the compelling feature that drove me to make the jump was the Dynamic Background Extraction tool (DBE).  That was required to address significant green gradients that plagued this image.

The above is composed of 40 * 5 minute frames (3 and 1/3 hour total), as noted with the Nikon D810A camera and Zeiss 135mm lens.  The lens is f2.0 and I stopped it down to f2.8 for all imaging on this trip.  Image reduction with darks & flats in DSS, then processed in PixInsight & Photoshop CS6.  The weather was cold for Texas and I recorded 43 degrees as the typical temperature during the imaging session.  I used 77 darks captured during 40 to 51 degree temps (captured on another cold but cloudy night).  I went with t-shirt flats, 72 of them, auto-exposed at -EV.  It looks like forcing your flats to be dim is critical to getting decent image reduction with the camera; perhaps it is non-linear in the normal exposure range...

After the gradient, the stars where a real challenge here.  Registar counted 492,302 stars in the original and very mildly cropped image!  I worked with star reduction in PixInsight and in Phototoshop, though I'm not entirely happy with the results.

This page has information and pictures on the equipment used during the trip.  This is from the Starry Nights January 2017 trip. 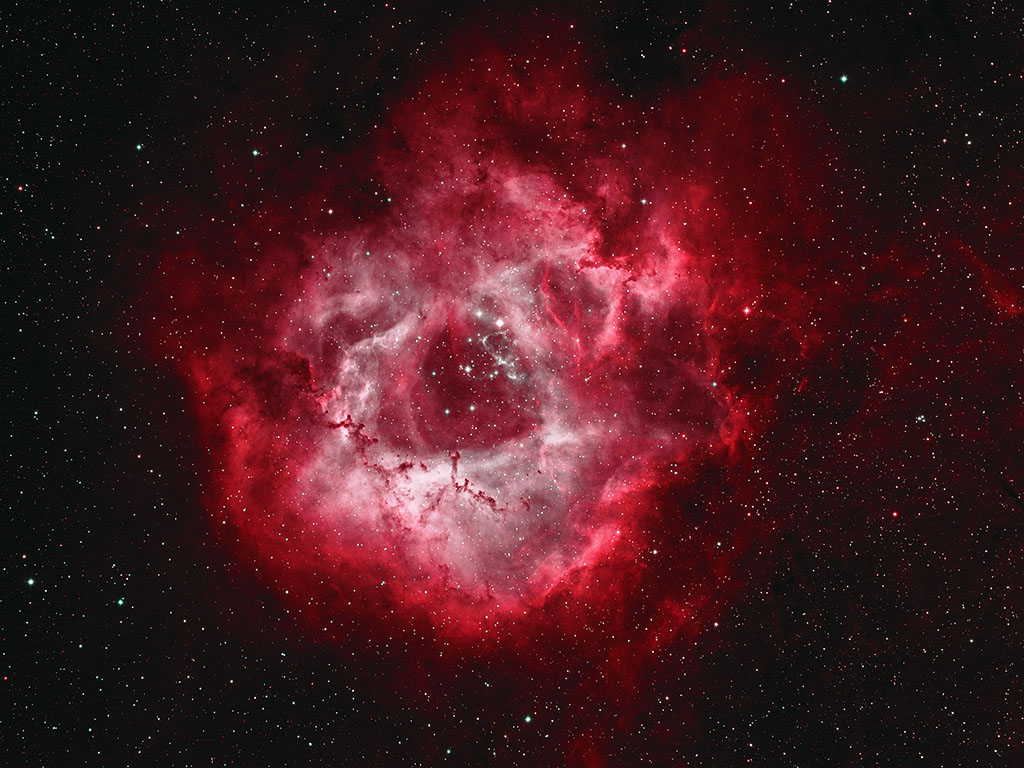 The image above mimics a "natural" color by blending the narrowband data as described at the bottom of my SBIG 8300 narrowband imaging page.  Same base images as the Hubble Palette image above. 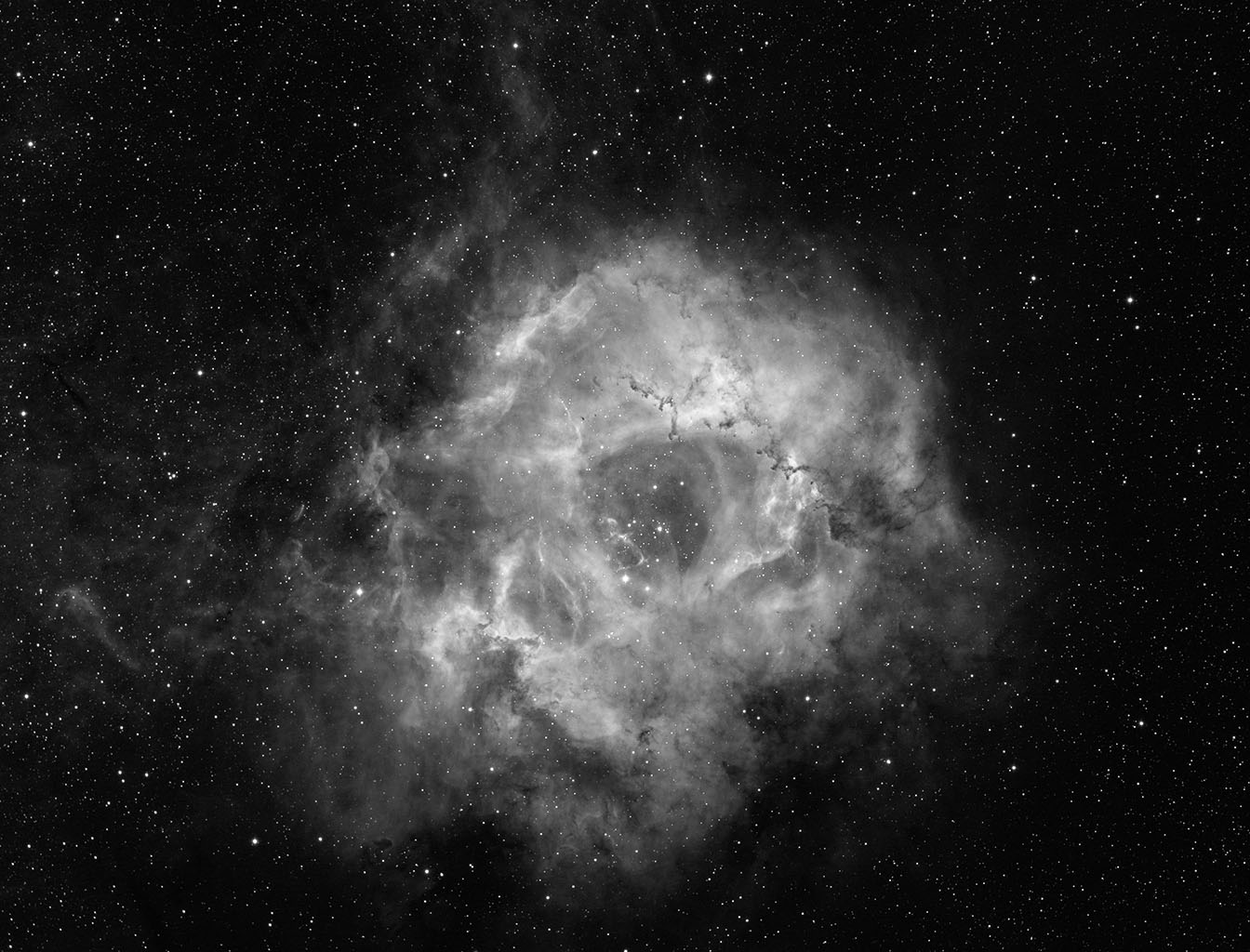 Many like the simplicity of a nice monochrome image.  The image above shows only the H-alpha data from the 2013 Davis Mountains trip, 30 * 5 minutes = 2.5 hours exposure with other details as noted above.

See a larger version of the H-alpha picture on my Narrowband Imaging page. 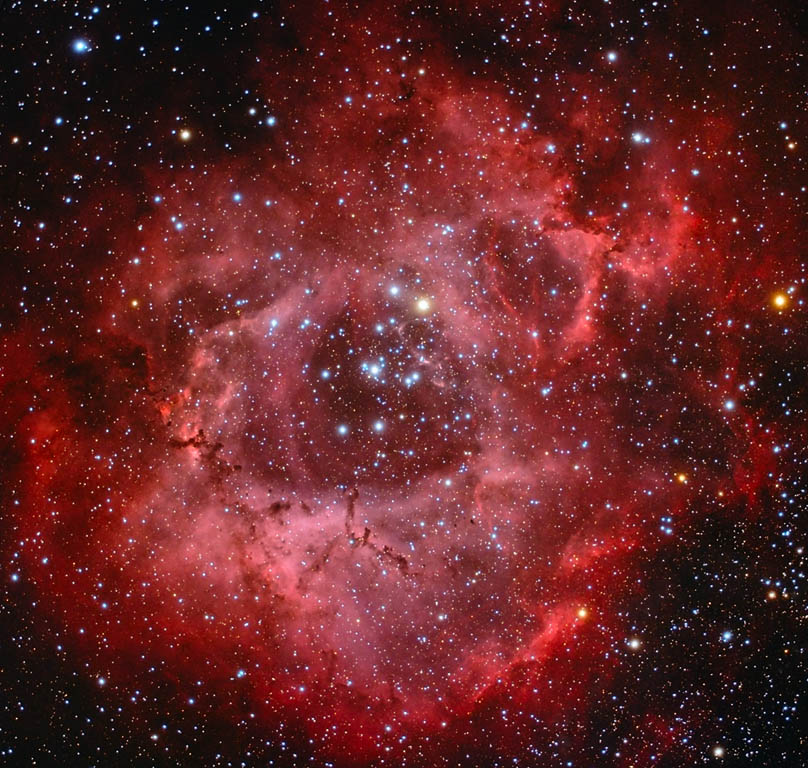 By way of comparison, this image consists of data captured in 2010 and before.  See below for older Rosette Nebula pictures. 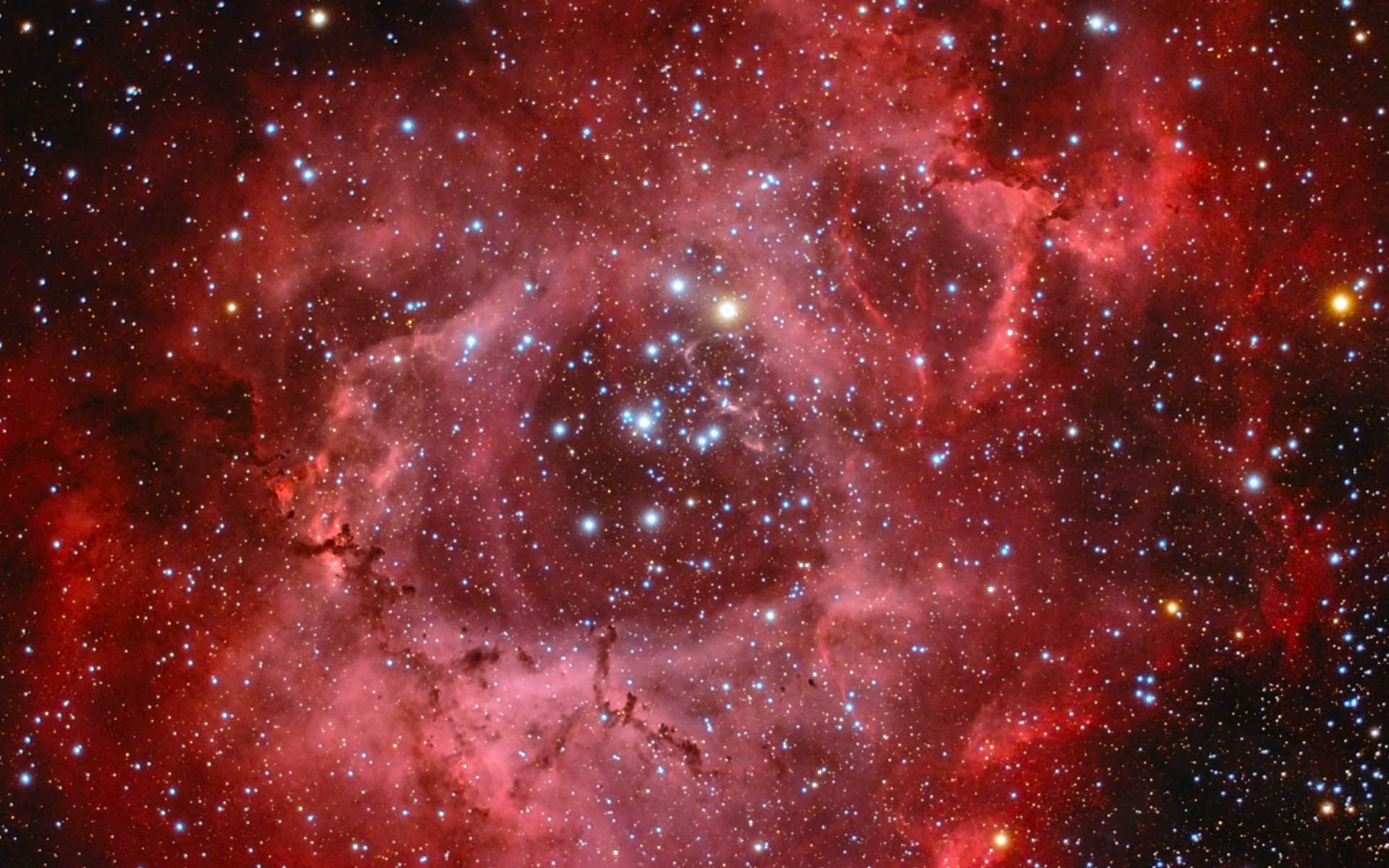 Click on the image above for the HD-sized version.  The above two images combine of over 5 hours of color exposure, plus a similar amount of H-alpha (Narrow band) stuff with the RGB version below.


Copyright © by Dick Locke.  All Rights Reserved.  Contact and Image Use Information