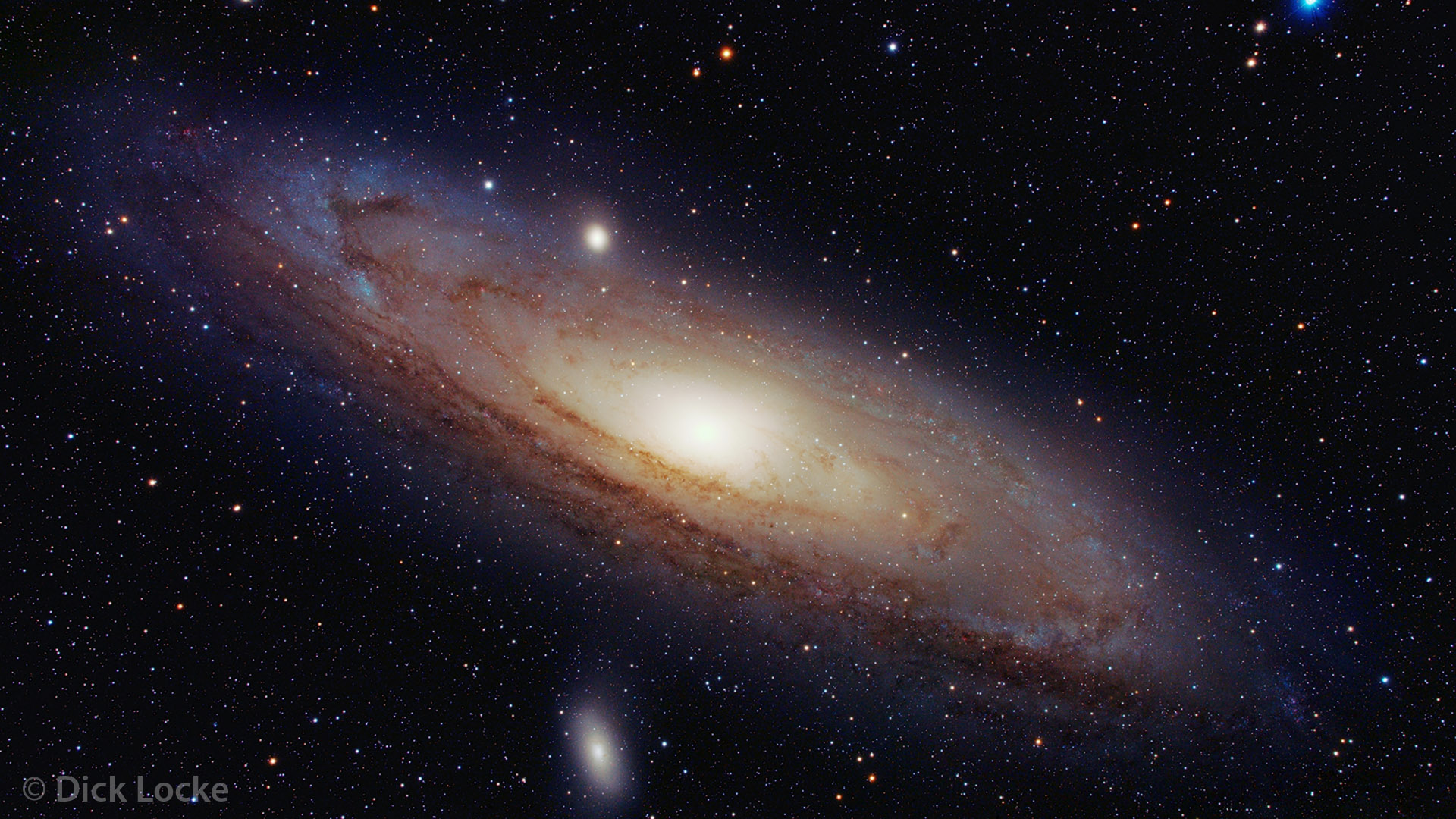 Equipment Discussion:  My previously posted image was from 2010, but I've worked on this object a few times since 2010.  Several things have prevented me from updating the 2010 image (below) including this object being a pain to process, it's big and hard to frame, and less than perfect quality of source frames since 2010.  The 2010 image is pretty good, also, so there was a high bar set!  The seeing was quite good on the two nights I spent on this object and it was close to the zenith.  The new Takahashi reducer is excellent and provides noticeably better optical performance than the old version.  Stars aren't perfect to the edge of the full frame on a 35mm chip, but they're not bad.  Check my Takahashi TOA 130 page (2nd image as I write this) for an un-cropped image with the full-frame camera & reducer.

Processing Notes: Processed via my workflow as described here.  My framing didn't perfectly align on the two nights I imaged this object, so I used only the overlapping area from both nights.  That makes the framing here a bit more cramped than it might be.  The HD aspect ratio cropping presented here also makes things a little cramped vertically, see below for taller versions. 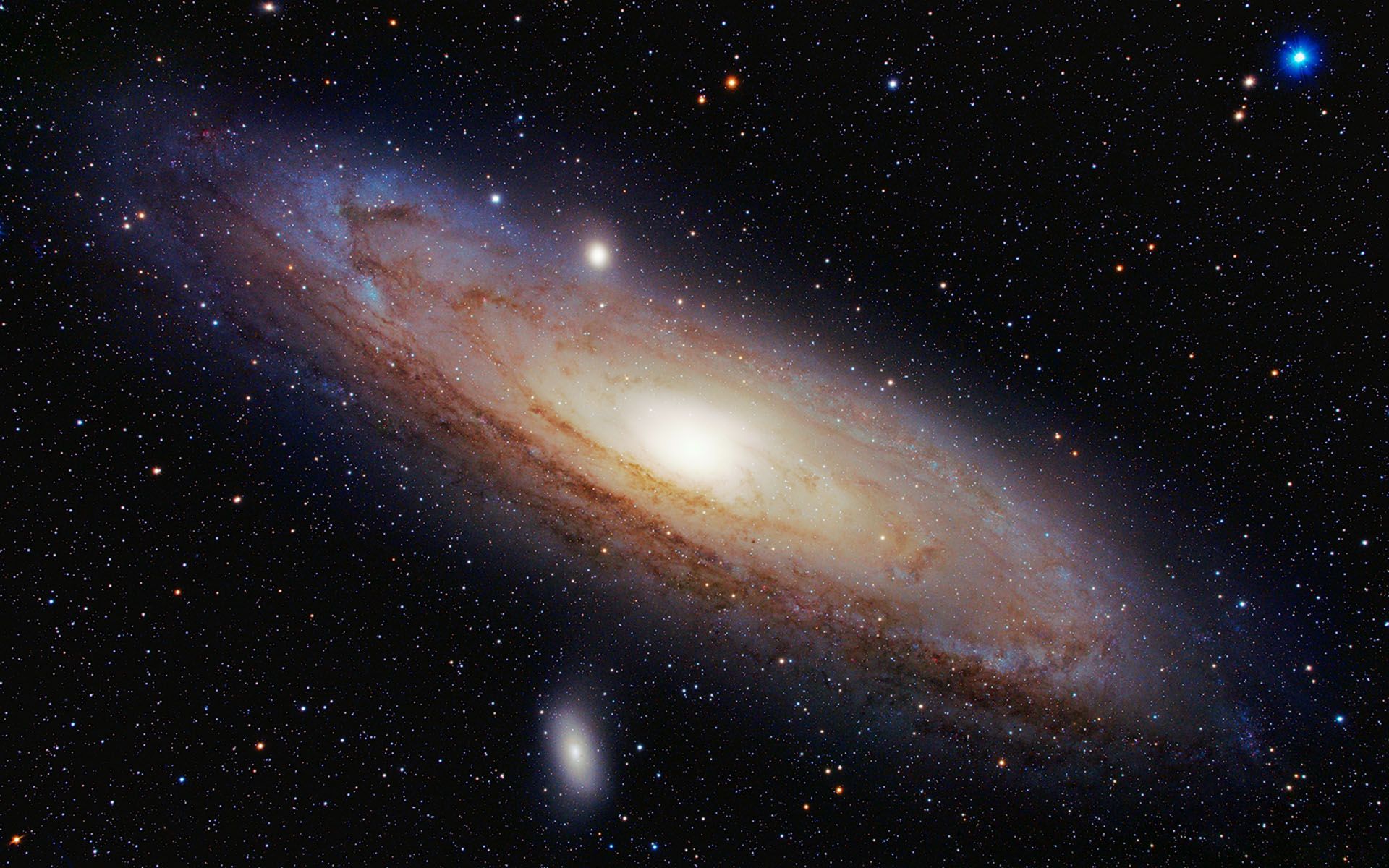 Above:  A little "taller" than the previous version with some additional processing.  I tried to preserve the core on this one.  Better or worse? 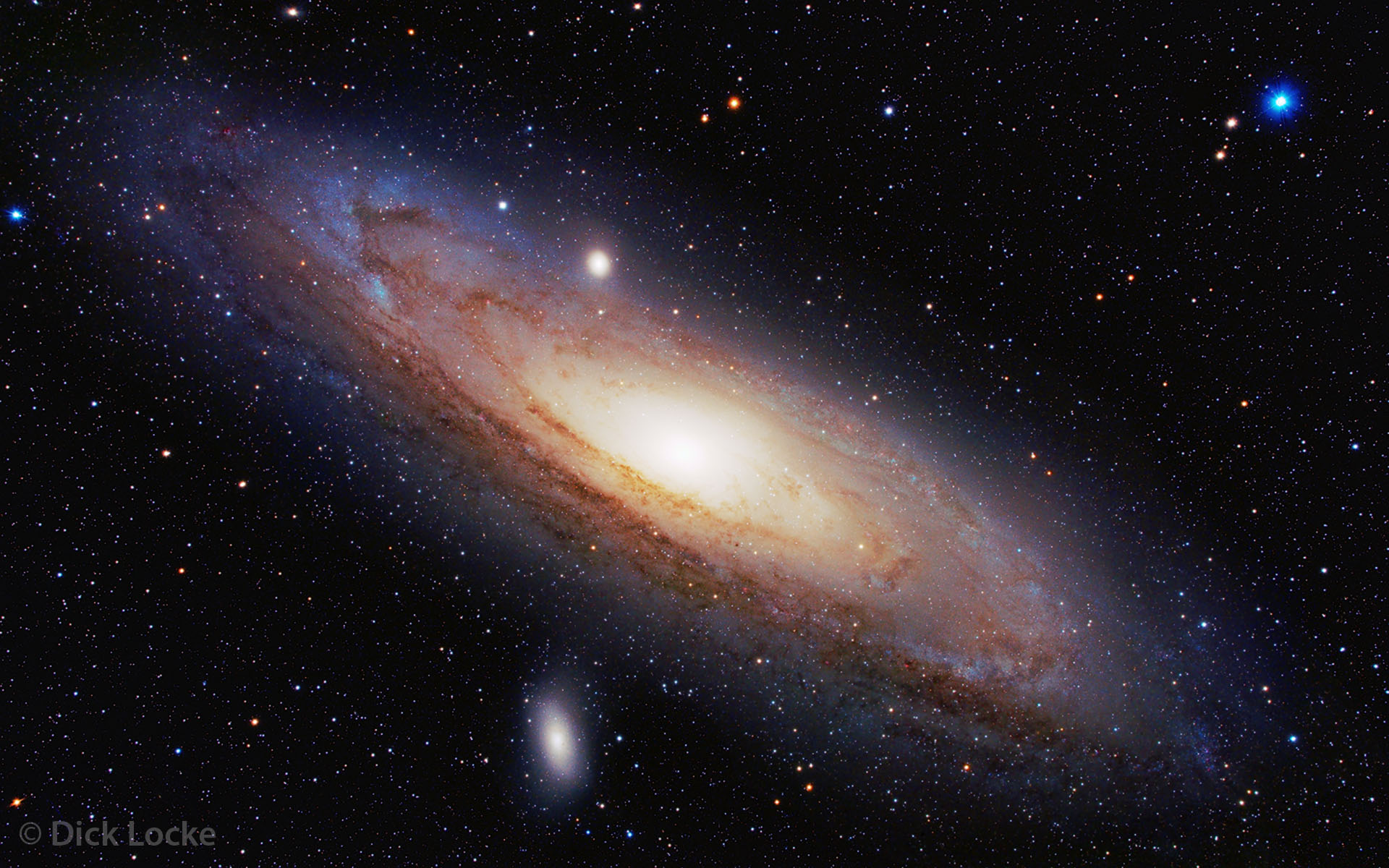 First reprocessing effort, a bit noisy?  I let the core blow out a bit. 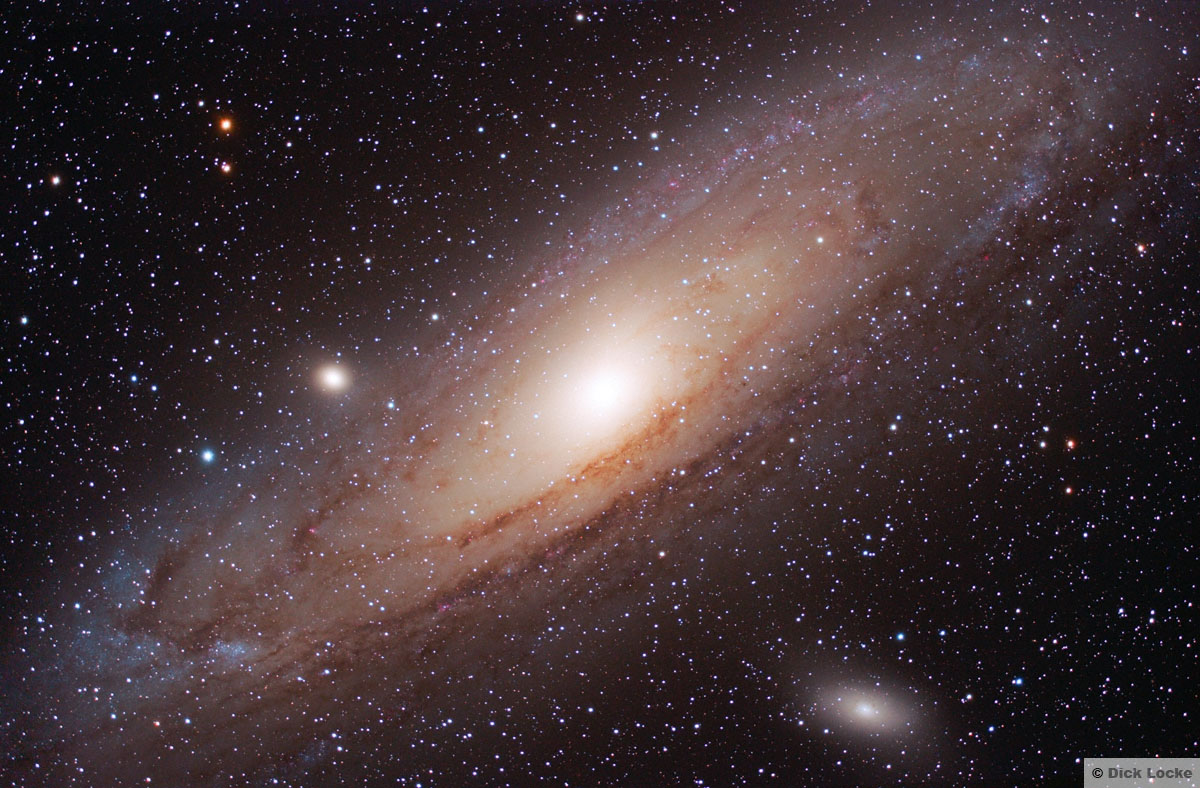 Here's M31, the Andromeda Galaxy.  This is the most distant object we can see from earth "naked eye."  The small red areas are caused by the deep red wavelengths of light given off by the

Bright Nebula in the neighboring galaxy.

See this Wikipedia link for more info on M31.  More: The Andromeda galaxy can be seen as a hazy patch with the naked eye from a dark site.  Therefore, it is the most distant object you are likely to see with the unaided eye.  It is easily visible with binoculars.  In fact, it is too large to fit into the largest field of view of many telescopes, so it is best appreciated with binoculars.

Notes: The image above is from the Fall 2010 Davis Mountains trip, 34*5 minute = 170 minutes total exposure.  I was hoping for more exposure time but the weather didn't cooperate and I had to discard a lot of images.  The quality minutes I do have, though, come from the famously dark west Texas skies.  The Takahashi TOA 130 (a 5" APO refractor) with reducer, and Astro-Physics AP 900GTO mount, QHY8 CCD Camera & normal workflow.  December 2010 from the Davis Mountains. 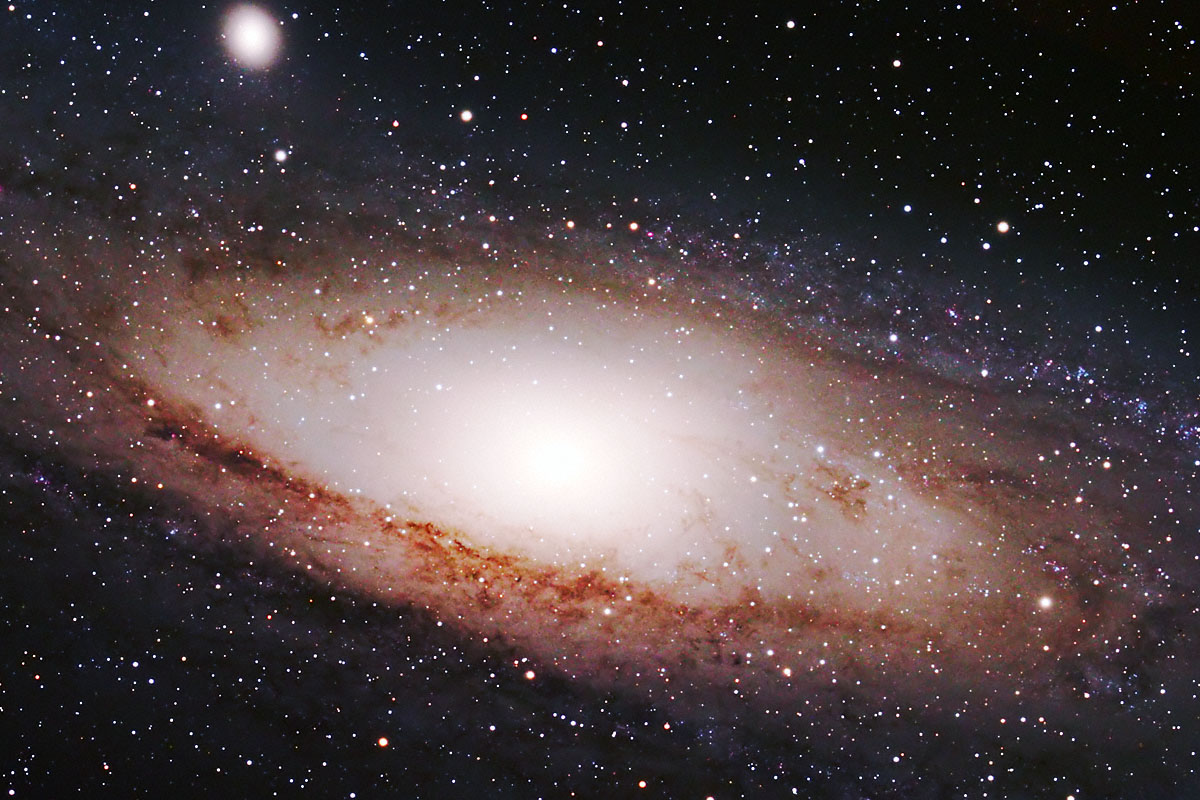 M31, The Andromeda Galaxy
(Above: Ruddy Dust Lane View...  Scroll down for others!)

Above: The ruddy dust lanes of M31 have always intrigued me.  I took some fresh images during the 2007 Davis Mountains trip and processed to enhance that feature.  Image above composed of "only" 16x4 minute = 64 minutes total exposure, ISO 1600.  Canon EOS 20Da (unmodified), ISO 800, Takahashi TOA 130 (a 5" APO refractor) with flattener, and Astro-Physics AP 900GTO mount.  Davis Mountains, TX, 10/2007.  I used my DSLR Workflow including the Lab technique to accentuate the colors.  Previously called: M31: Another Perspective 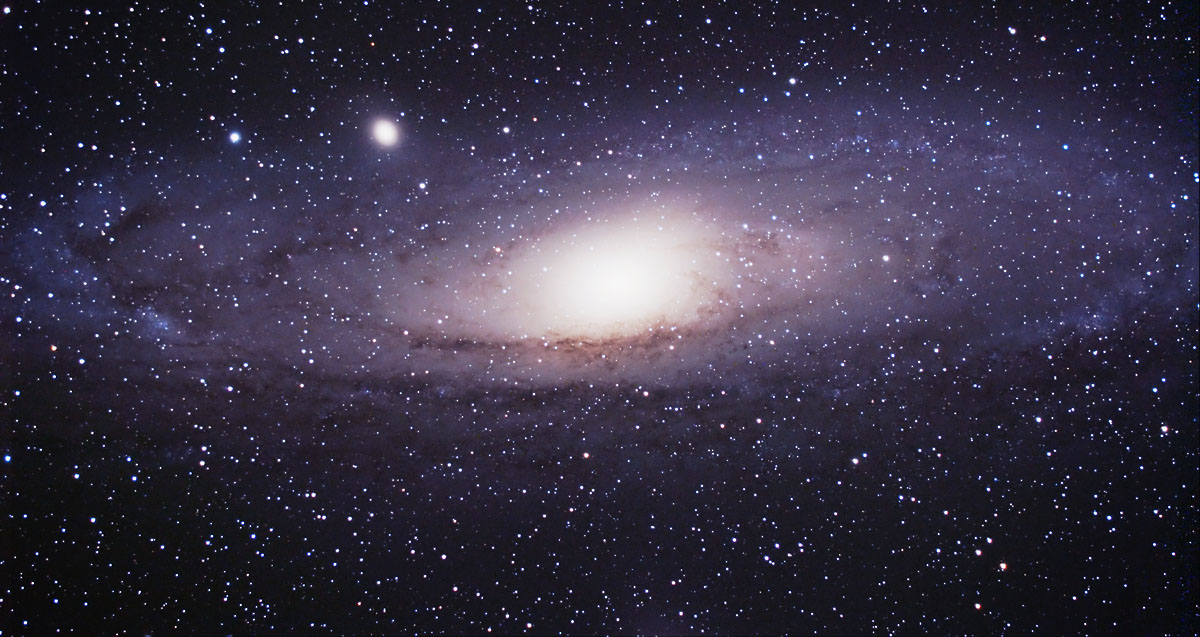 "Most Famous Galaxy?"  I think so.   The Andromeda Galaxy got some name recognition in a Star Trek episode, the one where  Andromedons (?) hijacked the enterprise for a 200+ year journey to our nearest galaxy. 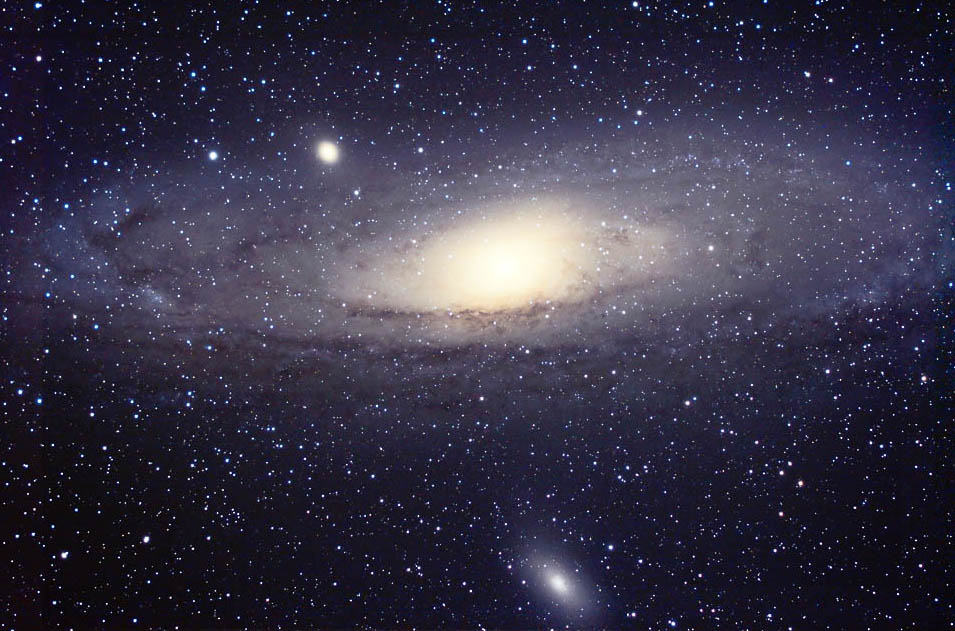 Image Notes: Check out the different color balances on these various images.  Which do you prefer?

Note the noise and color shift on the bottom image on the far right.  That's where the exposures didn't quite overlap.  The result is lots of extra noise on the right edge.  The top image is a "stack" of about 10 individual exposures over two nights using a Canon 20Da DSLR on my Takahashi TOA 130 (a 5" APO refractor).  Exposures were 4 minutes each at ISO 800.  Top image: Bias and dark frame processing using Images Plus.