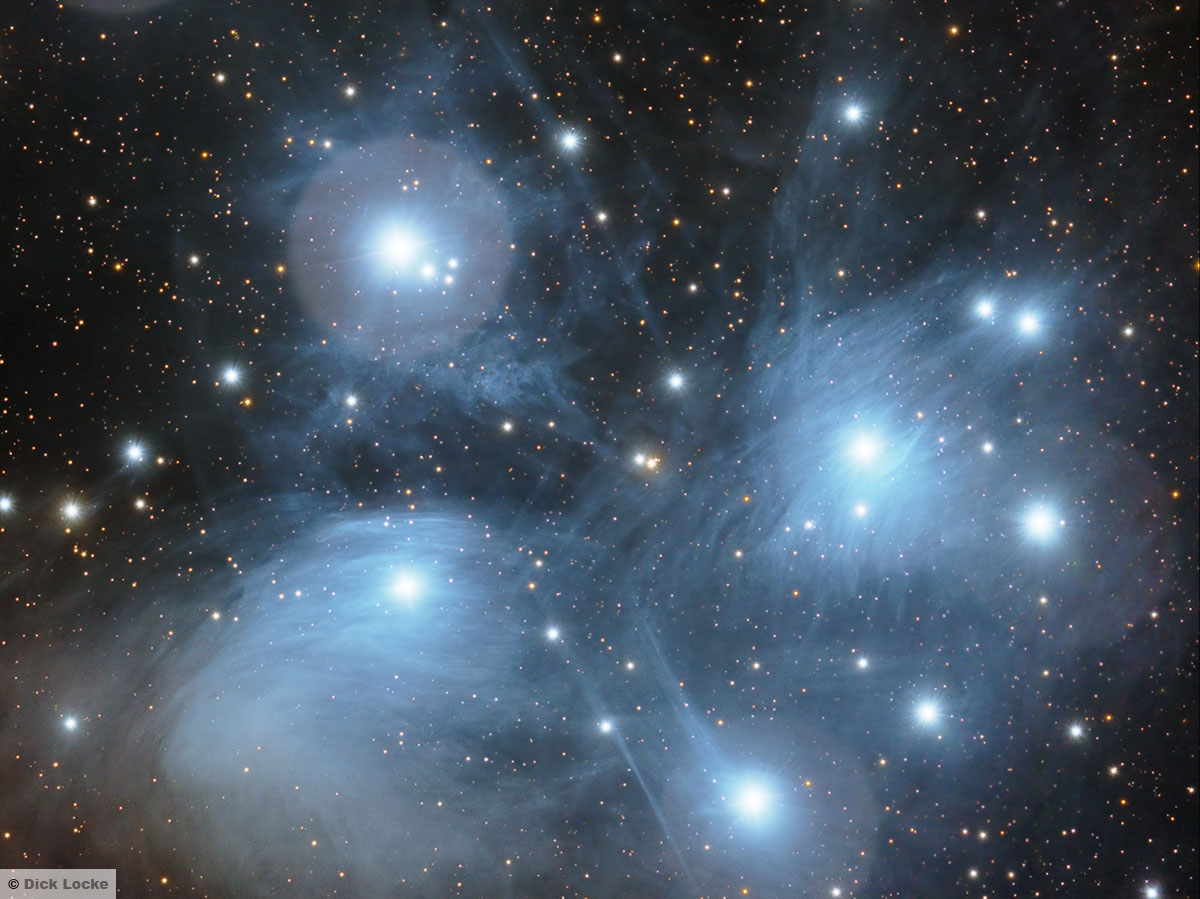 "The Pleiades" is Messier object 45, IC 353, and is also known as "The Seven Sisters."  It is an open star cluster and features a nice blue reflection nebula.  As it resembles a small dipper, it is often mistaken for the Little Dipper.  (The real Little Dipper is much larger and always directly North.)  Generally there are only 6 stars clearly visible in this object, and there's been discussion as to why there are seven sisters instead of six.  This object is quite high in the sky and well-placed for viewing in the Fall.  More info about The Pleiades is at SEDS.   Quoting SEDS: Their Japanese name is "Subaru", which was taken to christen the car of same name. The Persian name is "Soraya", after which the former Iranian empress was named. Old European (e.g., English and German) names indicate they were once compared to a "Hen with Chicks".

Imaging Discussion for Astrophotographers: This image combines 86 total exposures from the 2012 Davis Mountains trip.  I used the "color" images from my Takahashi TOA 130 as a base, then blended in Takahashi FSQ-85 filtered and combined frames after aligning everything.  The large halos around the bright stars are from the QHY8 shots, and I used the 8300 shots to dim those somewhat.  If I blended to completely remove the halos too much noise came through, so I tried to strike a balance. 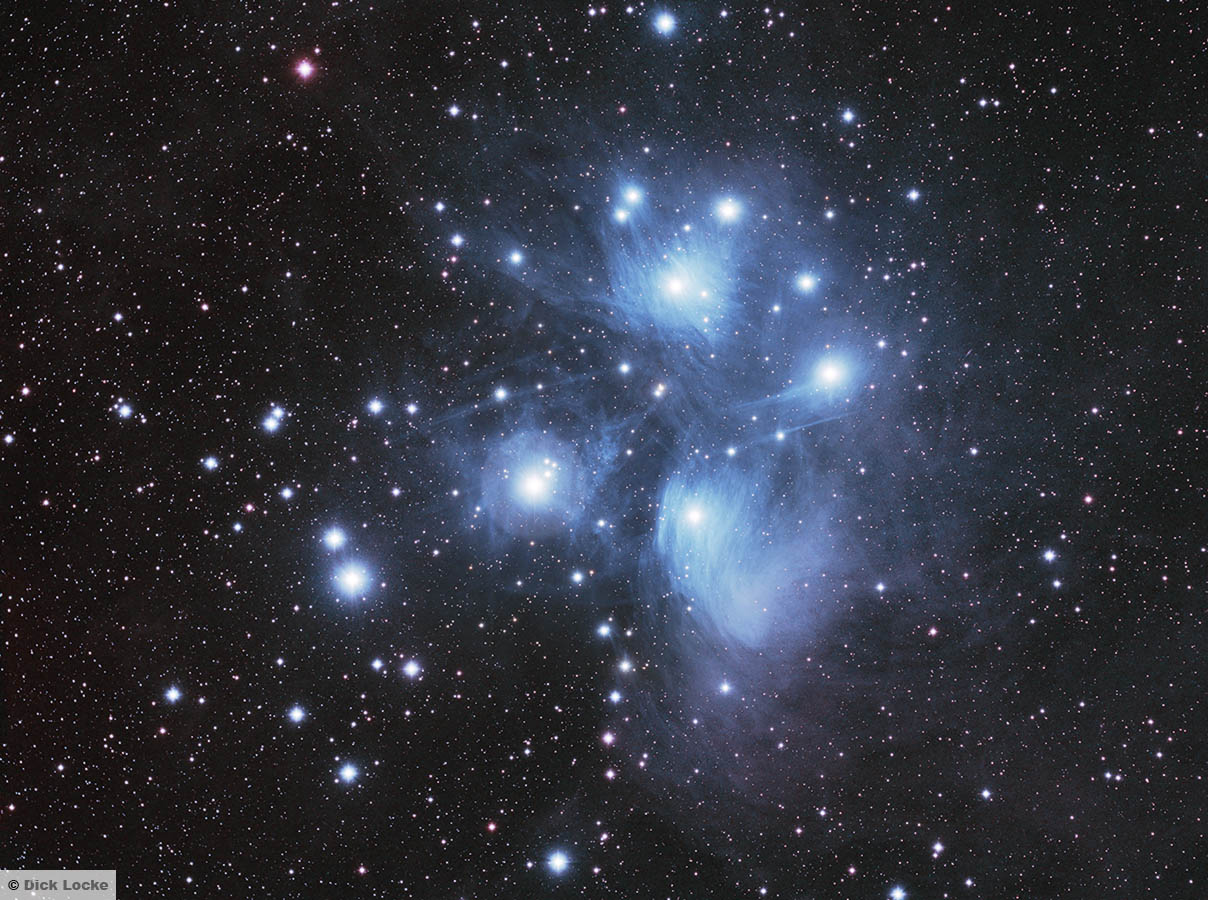 Image (above) details:  This image uses the wider FSQ-85 image as a base, with the narrower TOA-130 image blended into the center area to enhance detail and reduce noise. 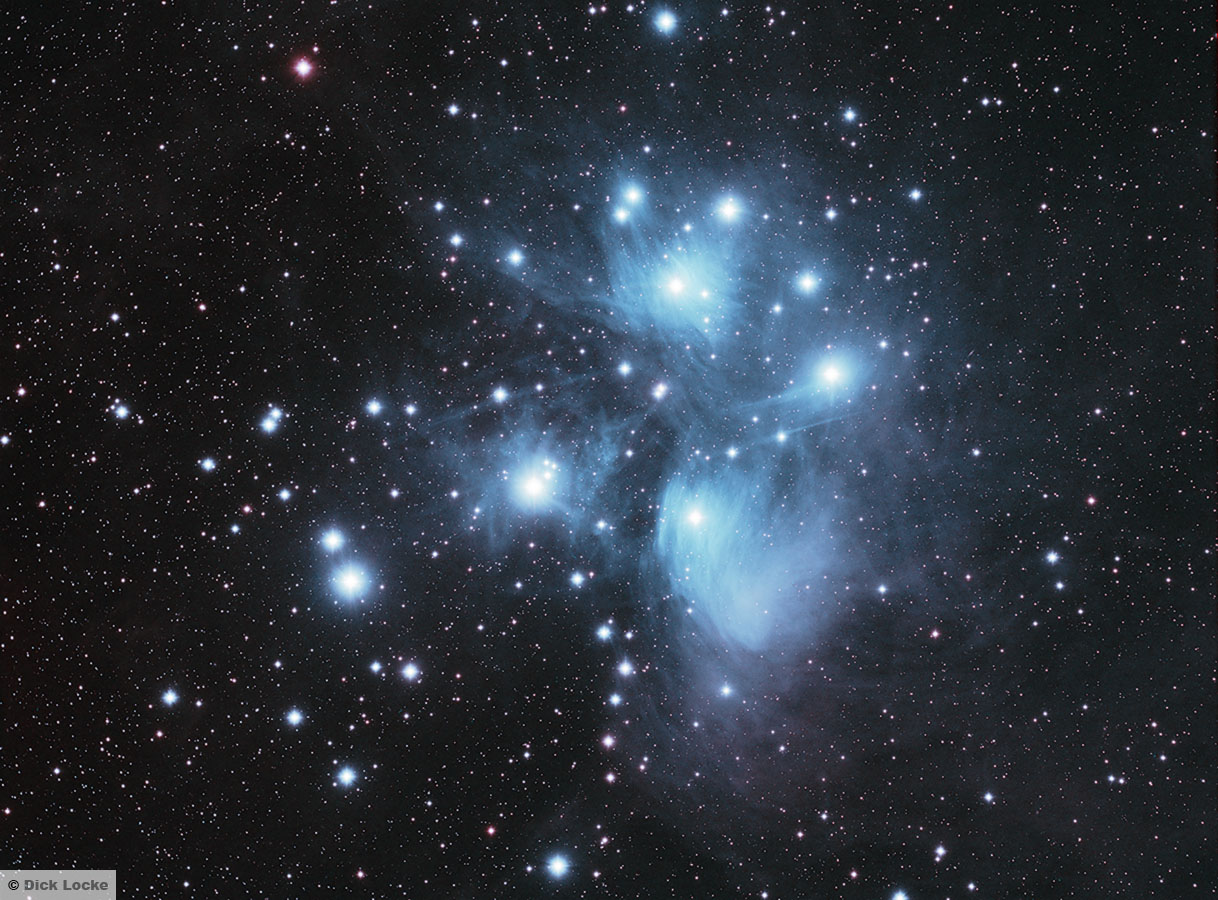 Image details above; this 44 * 5 minute frames from the FSQ-85 telescope and SBIG 8300M camera from the 2012 Davis Mountains trip.  It shows a wider view of this dusty area, without additional blending into the central area.

Imaging Discussion for Astronomers:  The "Interim" version above represents about 3.5 hours of total exposure.  The image is a combination of two stacks of 23 + 19 (each 5 min) images of different orientations.  You can see some areas are noisier than others; those areas are where the images don't overlap.  I also have a number of frames from my monochrome camera that I'll be working to combine into a "master" image so watch this space.  Compared with the image below, this one goes quite a bit deeper with the 3.5 hour (vs 1.3 hour) total exposure.  However, I was shooting at f7.7 with the flattener above, vs. f5.8 with the reducer below.  The flattener provided nice quality stars across the frame, which makes it better for mosaics.  I'm pretty sure I'll go back to the reducer next time, however! 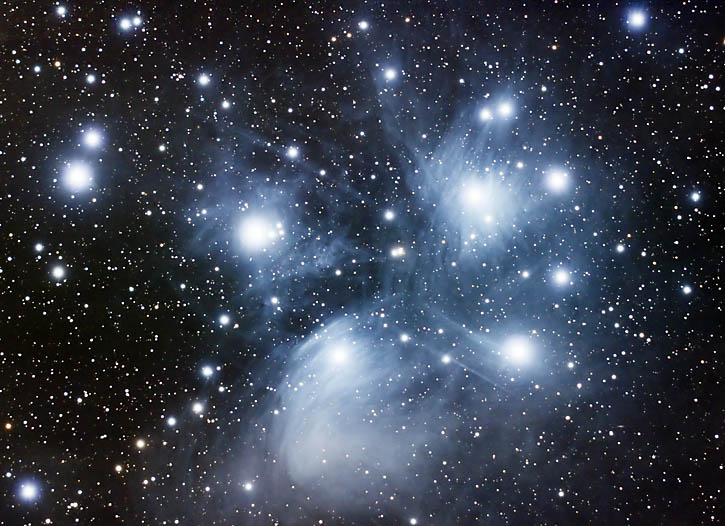 Galaxy UGC2838 is visible on the lower right, especially on the larger picture.  The Sky has that as a mag 17.88

Imaging data from this evening1/02/06;  The images from this session feature 69 averaged flat frames median combined, along with 16 dark frames averaged.  Temperature ranged from ~51 degrees F at the start of imaging to 42 degrees when I was packing up and doing my last darks. My current image processing workflow is here.

Below: M45 and the Moon (see these pictures and a mosaic here) 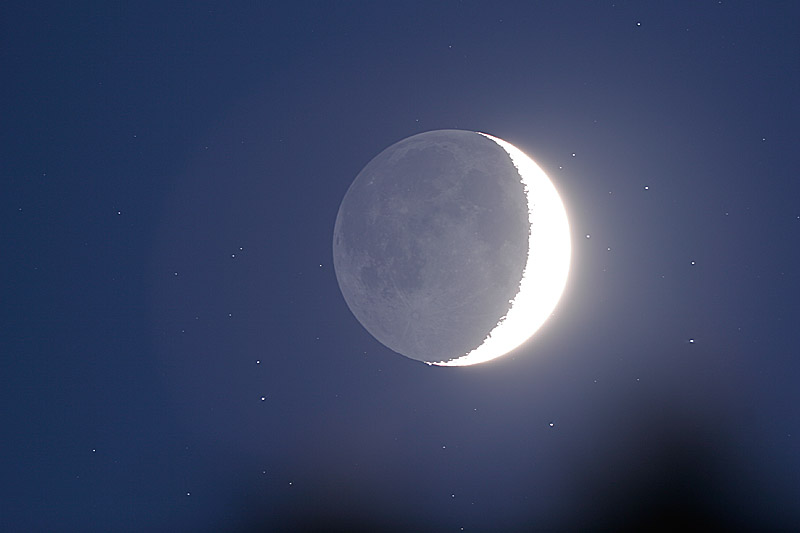 The Moon amid the Seven Sisters: April 1, 2006, The Woodlands

See the other Moon/M45  pictures here

Meteor through M45!  This is a single 4 minute exposure from the series above...