Comet ISON from Nov 2, 2013, right before sunrise from the Davis Mountains, TX. The image above is a combination of 4 frames (5-minutes each) aligned on the comet's head. You can see how fast the comet is moving relative to the star field.  Below is a single, 5-minute exposure.  Equipment was the TOA 130 telescope with reducer and QHY8 "color" CCD camera. 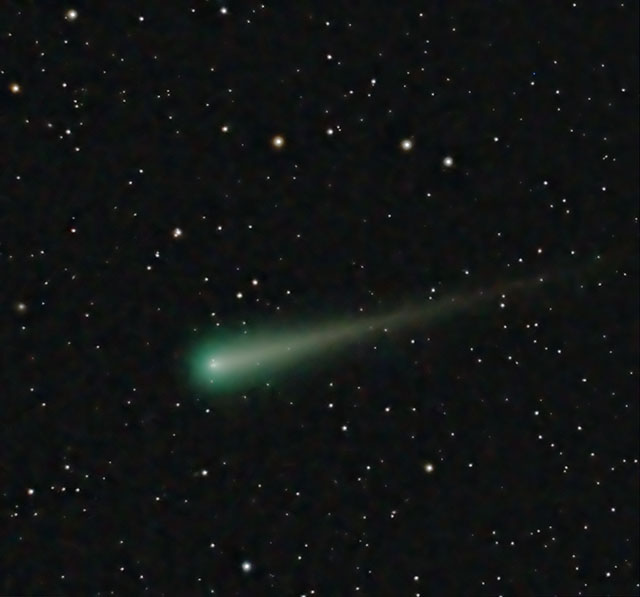 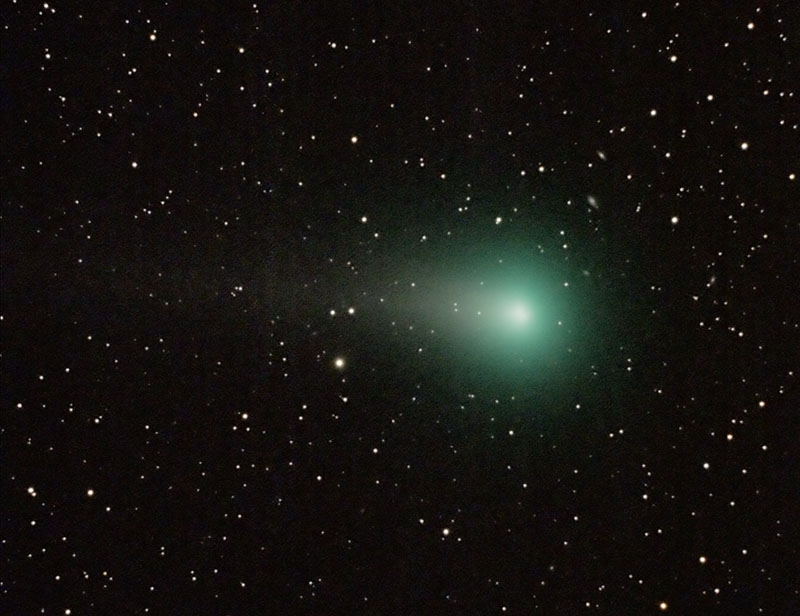 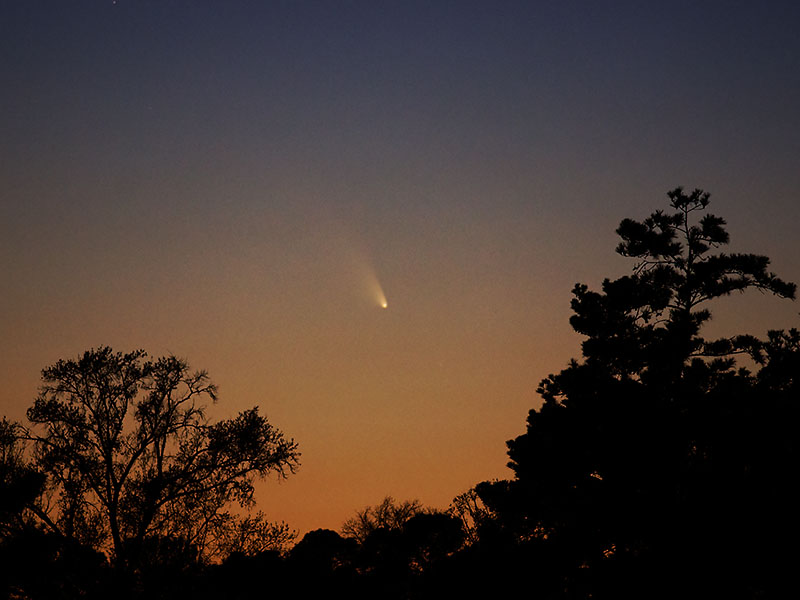 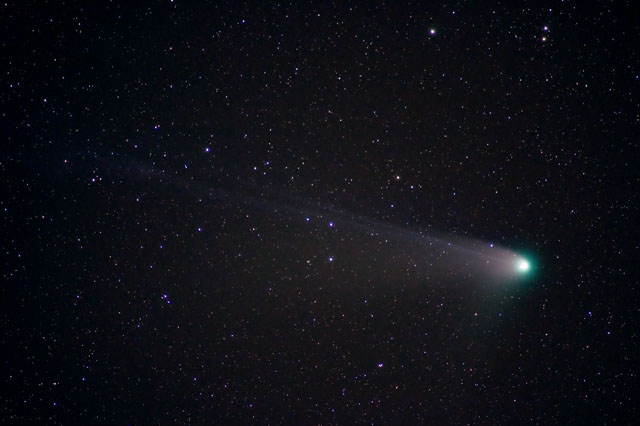 This was a nice, classic-look comet.  Scroll down to the NEAT section for more info in the shot above. 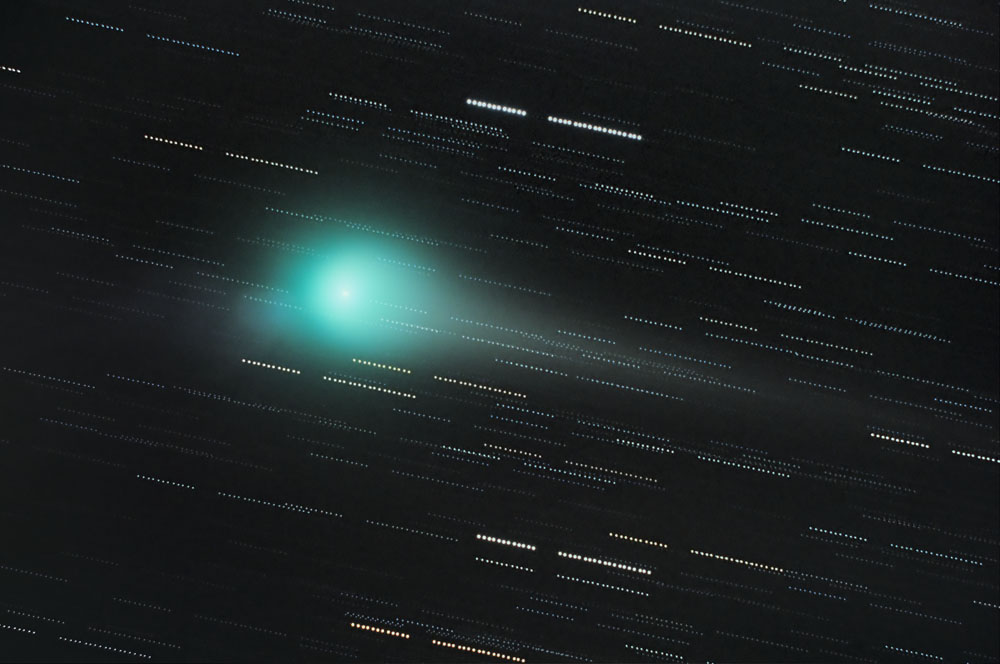 This image:  February 21/22 2009, 31 x 2 minutes = 62 minutes total exposure, from light polluted skies of The Woodlands, TX.  The frames above were grouped into one set of 12 images and another set consisting of 21 images.  That is seen in the groupings of the stars in this image that was aligned on the comet's head.  The comet is moving very quickly relative to the stars.  I'm sure could have done better from a dark site.  Interesting item: This article says Lulin is shedding 800 gallons of water per second as it approached earth in late January.

Takahashi TOA 130  Telescope (a 5" APO refractor telescope) with the reducer, AP 900GTO mount, QHY8 CCD Camera.    Images processed using my Astronomy Image Processing Workflow.  Astro-geek notes: I processed my images in Nebulosity, the software I use with the QHY8 CCD camera. It turns out it has a super-easy stacking function for situations like this; you just pick the comet in one image, have it "auto find and align" the rest, and done! That was the easy part; I had problems trying to use some old flats made with the reducer. I spend a fair amount of time this afternoon making some t-shirt flats against the clear blue sky. I think they turned out pretty well. I stretched a t-shirt over the front lens, using gaffers tape to keep it in place. Then I wrapped black paper around the tube to prevent the sun from directly hitting the t-shirt, pointed to a spot as far away from the sun as I could get, and shot a couple hundred frames ;-)

Scroll to the bottom of this link to see Lulin from March 2009 as it fades... 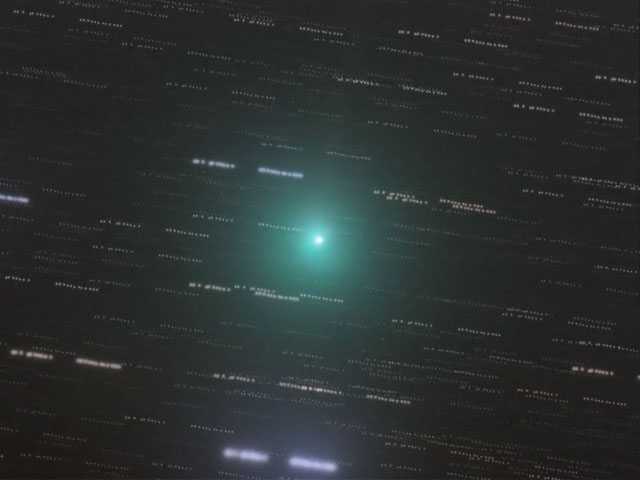 Above is ~26 frames of 1 minute each, then manually aligned on comet's head and "adaptive added" together using ImagesPlus.  The comet is moving very fast relative to the trailing stars.  Gaps in the star pattern are due to refocusing, taking of darks, and other interruptions.  Processing:  Background set to neutral, then I used my DSLR Workflow including Lab technique to accentuate the colors. 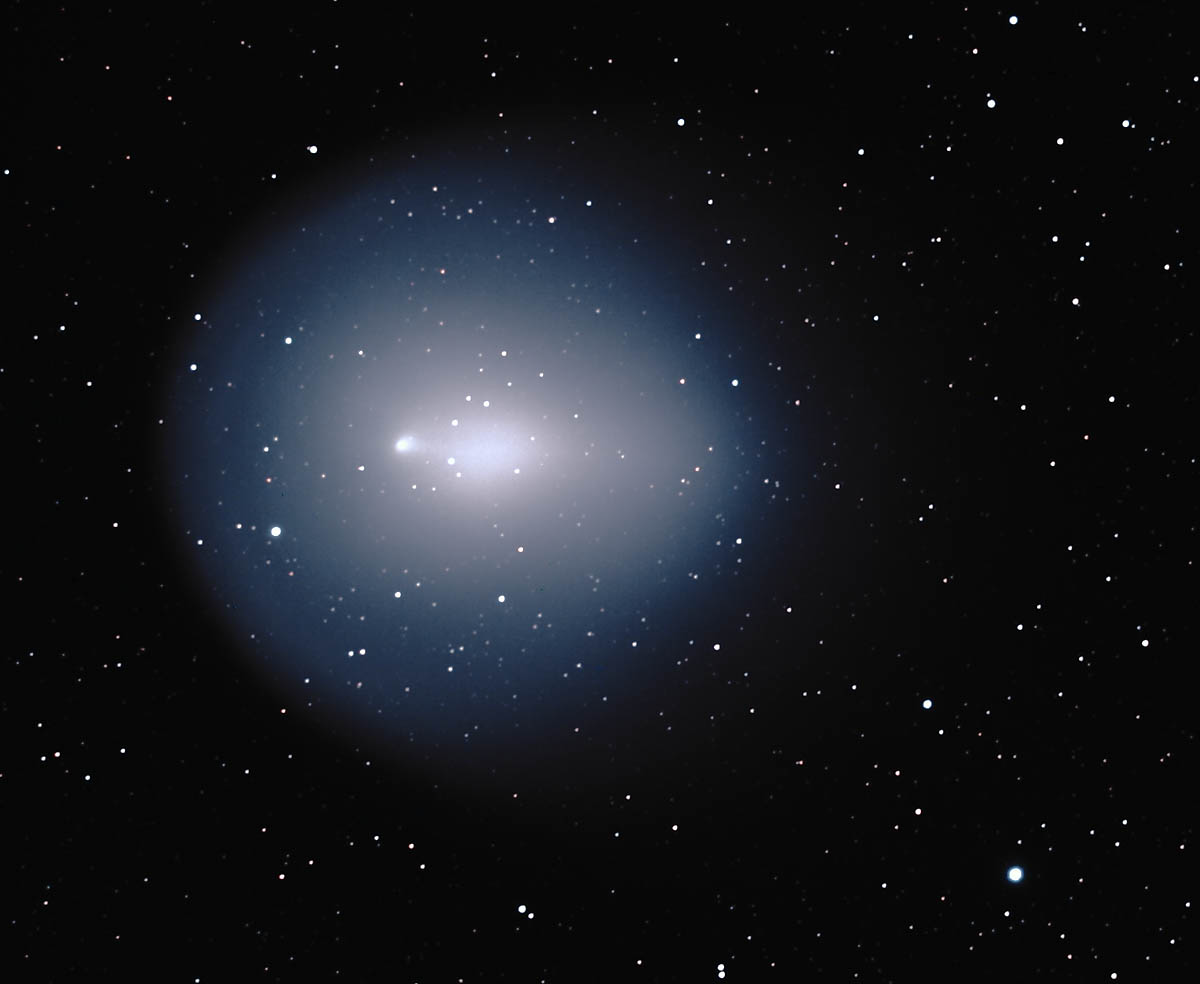 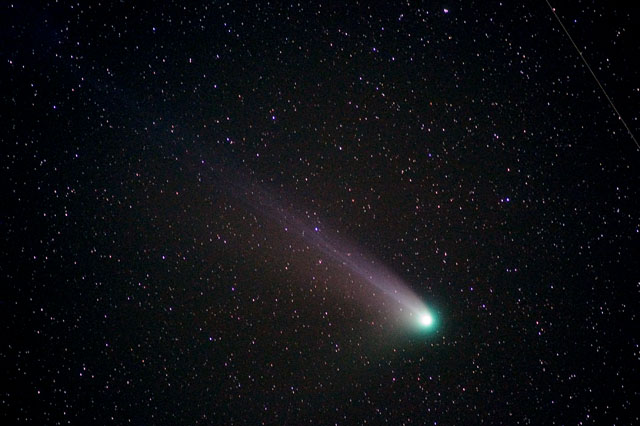 Photo notes on NEAT Nikon D100, camera raw, ISO and exposure time as indicated, in camera noise reduction,  Nikon 300mm f2.8 AIS lens at f2.8, and both are full-frame.   (The effective focal length is 450mm.)  Mounted to Losmandy G11.  Processed in Photoshop with individual channels stretched to improve  contrast, then a black level set to 15,15,20 (RGB) with the eyedropper.  I used Neat Image noise reduction on the 2nd image (seems appropriate for a NEAT comet, eh?)  The colors are pretty close to what came out of the camera...

Below: a picture of comet Ikeya-Zhang. I took this in Wimberly, TX  on March 11, 2002.  I reprocessed the original shot to get a higher resolution image. 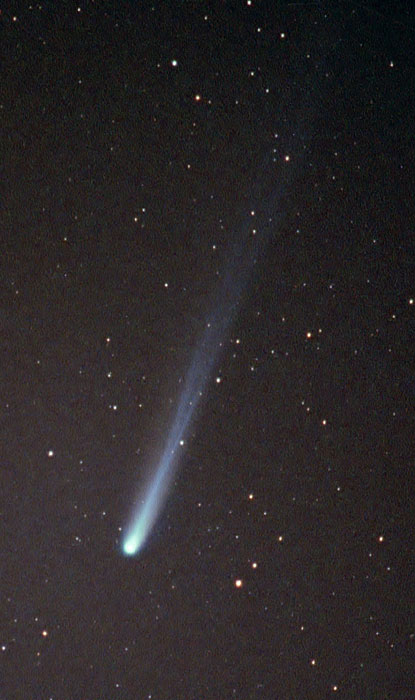 This comet was discovered by two amateur astronomers.  It comes around earth every 341 years, so it was last seen in 1661. Under excellent conditions it was a naked eye object.   More info is at: http://www.cnn.com/2002/TECH/space/03/13/comet.watch/

Here's the older, lower resolution version. It's quite a challenge in Photoshop for a variety of reasons 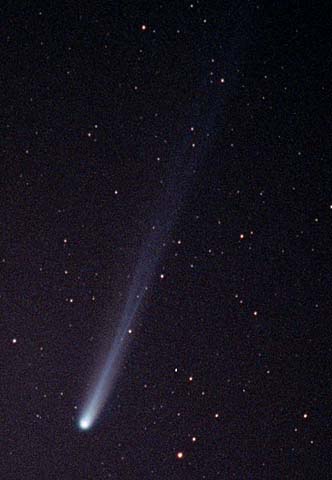 Lots of detail about shooting and processing comets here