A more sedate 2012 version of the Orion Nebula area is here.

Chanel is using the black and white version of M42 in some 2011 press release material.

Stars are literally being born as we watch this area of the sky.  To help give you a sense of what's going in in the heart of all this, I've posted three new images above.  They are close-ups of the heart of the Orion Region.  I think the "black and white" (really grayscale) images are interesting.  To me the wavy undulations show up especially well on the large, left image above.  They look like shockwaves of energy, especially in the upper right portion of the nebula .  They are derived entirely from the green channel of the images below.  The green channel best conveys the dynamics of the this incredible region of the sky.

From The Sky 6: M42 itself is apparently a very turbulent cloud of gas and dust, full of interesting details, which C.R. O'Dell compares to the rich topography of the Grand Canyon in his HST photo caption. The major features got names on their own by various observers: The dark nebula forming the lane separating M43 from the main nebula extends well into the latter, forming a feature generally nicknamed the "Fish's Mouth". The bright regions to both sides are called the "wings", while at the end of the Fish's Mouth there's a cluster of newly formed stars, called the "Trapezium cluster". The wing extension to the south on the east (lower left in our image) is called "The Sword", the bright nebulosity below the Trapezium "The Thrust" and the fainter western (right) extension "The Sail".

This rest of this page shows a comparison of my "final" image (below) verses my "first" image (below that).  My primary M42 page has more info about this great part of the sky, here.  What I ended up doing here was a variant on Jerry Lodriguss' layer masking technique on M42. 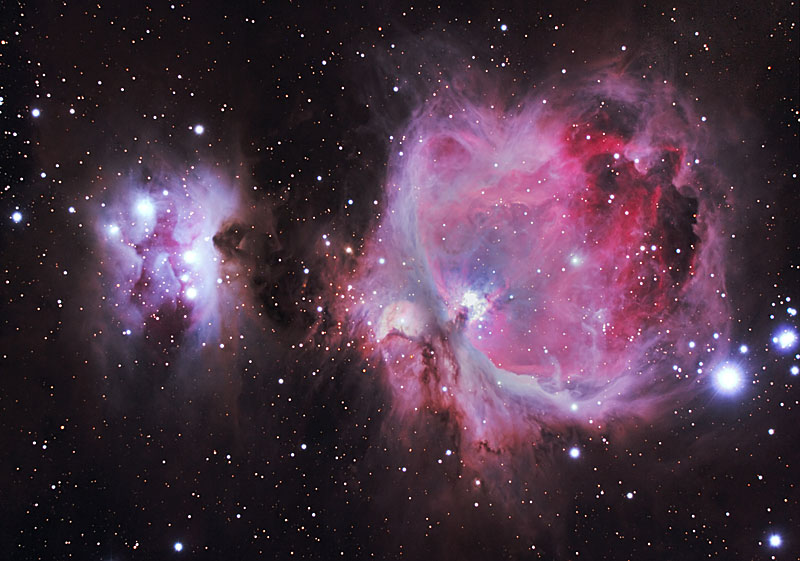 What I did was to reprocess my original M42 stack to focus on bringing out the color and detail in the M42 core region.  This is I went so far as to increase the saturation of that area with the idea the blending it in would dilute the color.  I then experimented with the layer mask until I achieved a relatively smooth blend.

In more detail, I used Registar to align my old image with the "core-enhanced" version.  I created a "min" and a "max" version, with the min version being the "good" core area.  I then selected, feathered, inverted and deleted the non-core parts of the good core image.  I used the good core image as the mask, adjusting the blurring and levels of the mask until I was "happy."   Thanks to Jerry for the excellent description of the technique here.

M42, the Orion Nebula, is a great area to view and photograph. It is very difficult to process images of this region, though, because the core area is extremely bright relative to everything else.  It's bright enough to activate the color sensors in our eyes, and is often descrbided as having a greenish glow.  It looked blue from the back yard last night.  Do you suppose that the bright moon might affect the percieved color of M42? 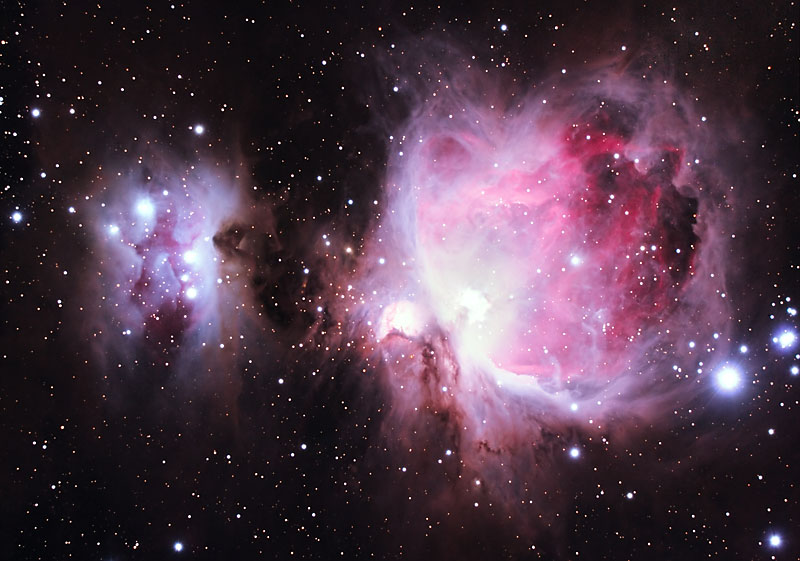 The above image is OK, but the central core area is "blown out" from stretching the image to bring out the faint detail in the outer areas. Now depending on your point of view, you may prefer the more dynamic impression caused by the blown out version.  Beauty is in the eye of the beholder!

My current image processing workflow is here.  The images from this session feature 69 averaged flat frames median combined, along with 16 dark frames averaged.  Temperature ranged from ~51 degrees F at the start of imaging to 42 degrees when I was packing up and doing my last darks.  The rest of the images from this night...

This is the rare image where I could get a red to show due to the D100's IR filter.

And here's an old film image:

Just as another comparative note, Robert Gendler had just published a revised M42 image which is better than mine.  His image used a high-end, cooled CCD camera, extremely high-end scopes, and 90 hours (yes, hours) of combined exposure, not to mention how ever much time he spent putting the mosaic together.  90 hours exposure is an order of magnitude more than with my image, at 85 minutes of total exposure.  So I feel pretty good about my relatively modest DSLR result compared with Gendler's...

The Hubble just did a new version of this, and while it's fabulous in its own way, it may not be the most aesthetically pleasing of the selections.
http://hubblesite.org/newscenter/newsdesk/archive/releases/2006/01/full/