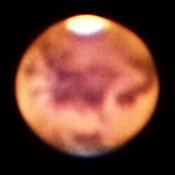 Above and Below: Mars night of 8/29/03, stack of 60 images above, stack of 25 below left; stack of 71 below right.  Note the polar hood feature (the bright blueish area at the bottom).  Mars was just about it's max size and brightness. 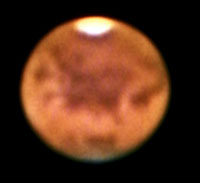 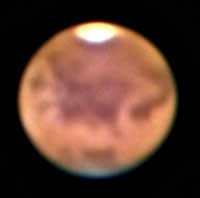 The above appeared in the Greater Houston Weekly, which is a supplement in the "non-Houston Chronicle" papers.  They are produced by the Houston Community Newspapers Group.  A total production run in the areas is 500,000 copies. 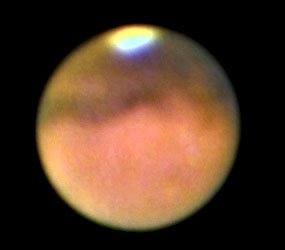 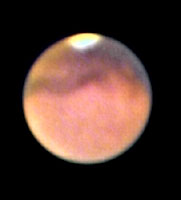 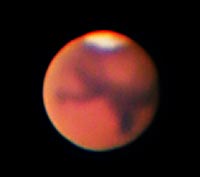 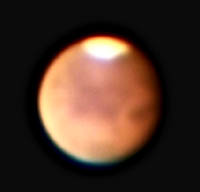 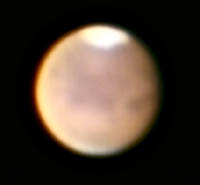 Above: Mars, taken 7/27/03.  This is a combination of about 250 images taken between 3:30 and 4:15 a.m.  The image on the right represents an effort to separate the color channels and to realign them.  The image on the left comes from the same source and just ended up with a different color balance when processing was completed.  Images graded, aligned, and combined in ImagesPlus, then processed in Photoshop including an unsharp mask set to 16 pixels.
To see larger images of the above, click on the thumbnails below. 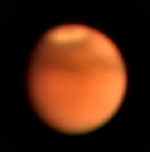 Update 7/13/03:  Got up at 3:00 a.m. this morning.  The weather was clear, dry, and pleasant!  I used  the PS-One external monitor on my camera this time, and doing so seemed to address the battery drain/camera overheating problem I've been having.  The image above right is a stack of 94 shots.  The orientation was reversed to stay consistent with what others seem to be doing.  Used my Celestron 26mm EP, various exposure times centered around 1/20s, otherwise same details as below.  After resizing to 150 pixels wide I tried a variety of unsharp mask radius settings and settled on 15.0 pixels.  The two images on the left are from the same stacks of 120 images processed differently in Photoshop.  Basically I tried for a more neutral color balance on the middle image, where I didn't mess with the color balance in the one on the left.  The 1st two images are reproduced in a smaller size, below.

OLD NOTES: Here's my Mars observing report so far:
7/4/03, 4:00 a.m.  Cloudy
7/5/03, 4:30 a.m.  Cloudy
7/6/03, 4:00 a.m.  Partly cloudy.  I set up in my driveway and saw some intermittent good views, seeing a prominent and well-delineated ice cap, and some dark surface markings.  Very small now, using my 3mm EP (273x).  Started taking pictures.  Naturally, when conditions improved briefly, the batteries in my camera died.  The 2nd set, which are new, died after two exposures and seem to be defective.  After that, the clouds came back.  I put the stuff away and went back to bed!
The best two images were combined and look like this (below).  Hope to do much better in the coming weeks!

My other Planets Page

Go to my main home page

Go to my astrophotography page

The hoaxers are getting bolder, and the latest email we received is embellished with photographs, graphics and continues to include the same information from 2003 but does not tell people what year in the email, so people are naturally assuming it is this year.  Here is the text of my article to appear in the Museum News for Sept/Oct 2005.

Mars, The Great Halloween Pumpkin in the Sky!

You may have received an e-mail this summer stating that Mars will be closer to Earth than ever before. This e-mail is a hoax, recycled from 2003 when Mars made its record-breaking approach of 34 million miles. But don’t be disappointed, Mars will be nearby and visible this fall.

Here are the facts about Mars in 2005. Mars will be 43 million miles from Earth during late October and early November. A great advantage to this year’s approach is that Mars will be seen at a much higher altitude than it was in 2003, making its surface markings and polar icecaps easier to see through small telescopes.

The night of closest approach to Earth will occur on Saturday, October 29. The planet will rise at 7:13 p.m. CDT and will be closest at 11:21 p.m. CDT shining at a -2.3 magnitude, outshining all the stars. Join us at the George Observatory on Saturday nights throughout October and November while Mars will be exceptionally bright and visible.