Black-chinned Hummingbird Pictures now have their own page here!  Birds Index is here 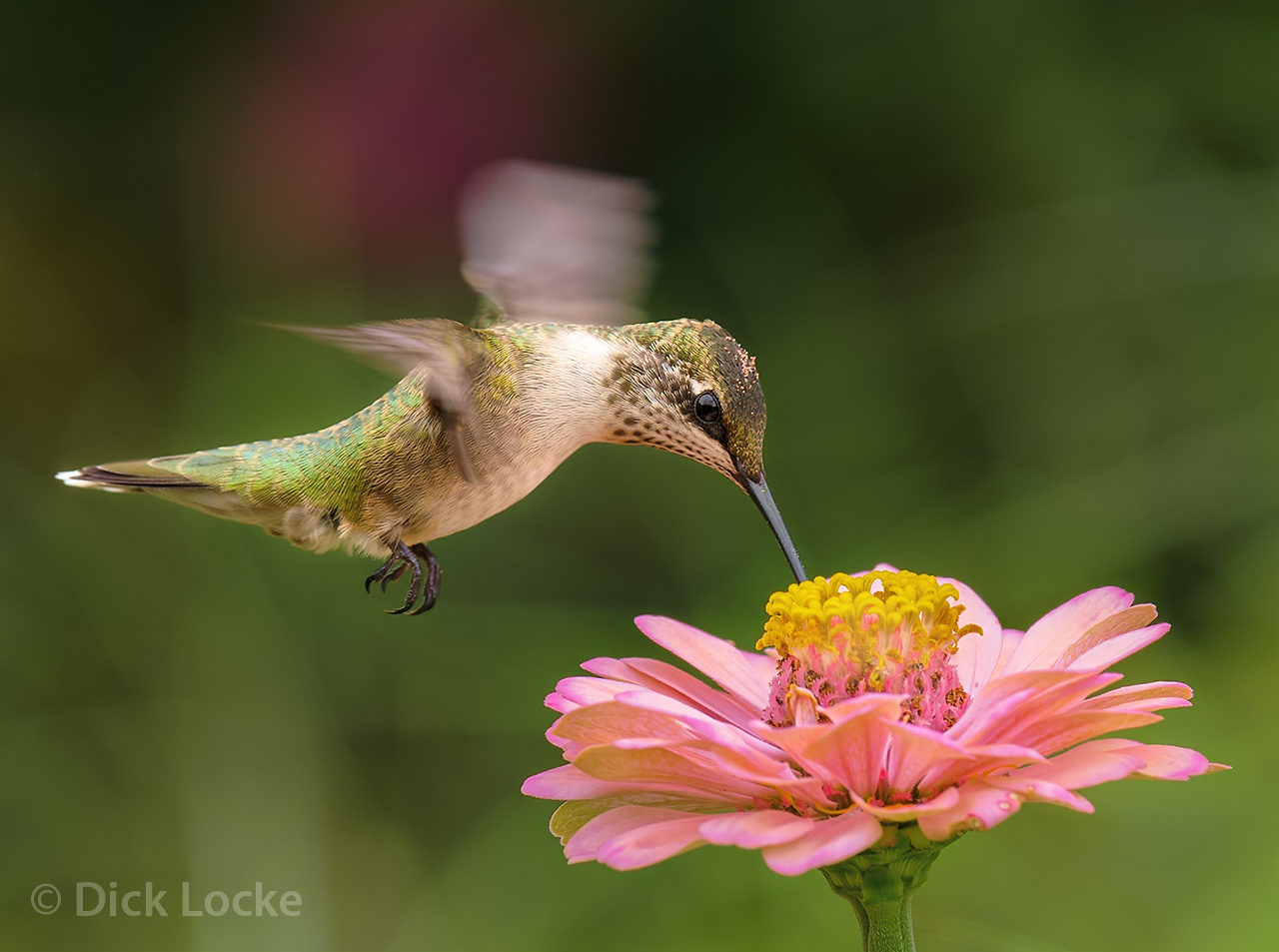 Ruby-throated Hummingbird at a Zinnia Flower 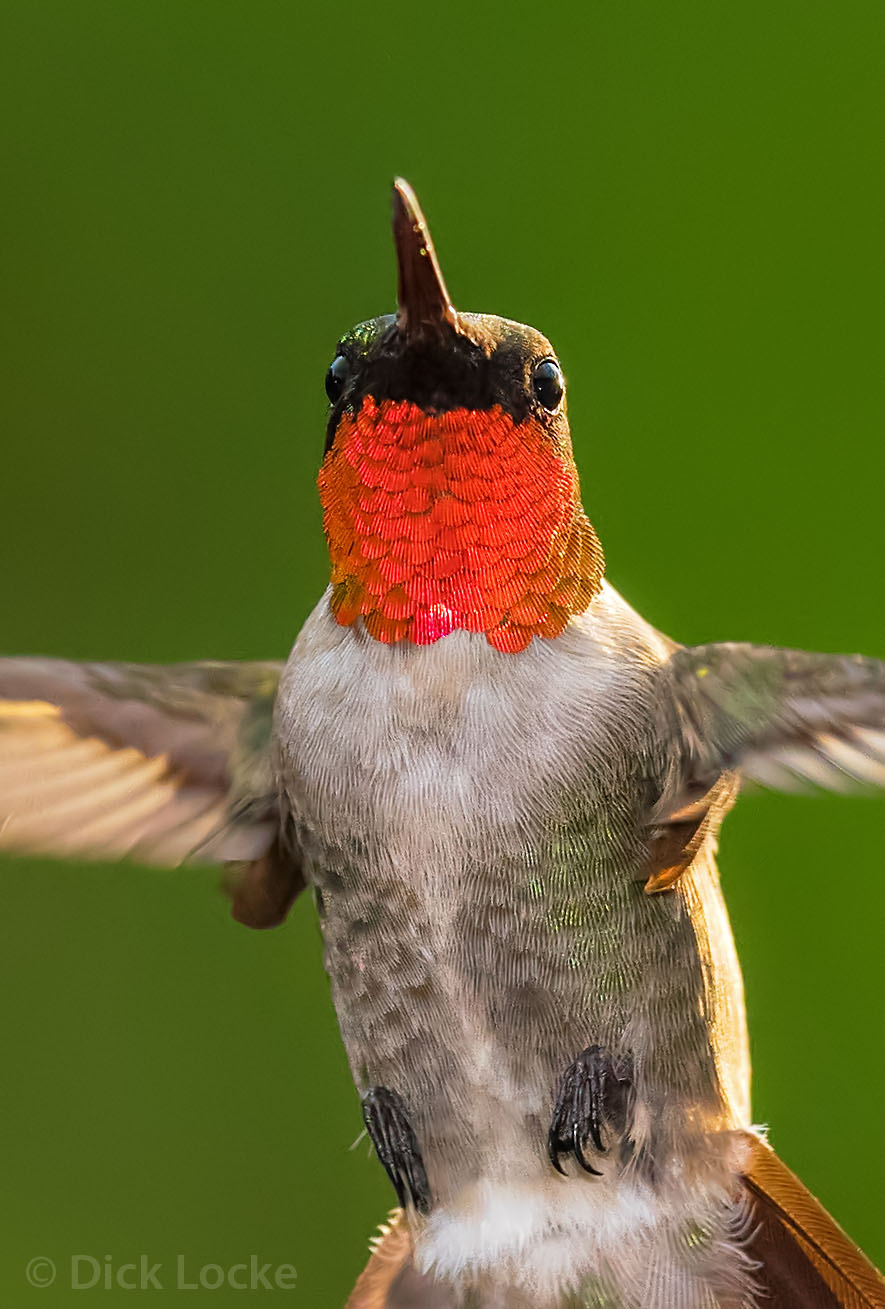 Above from September 2017 in the back yard. 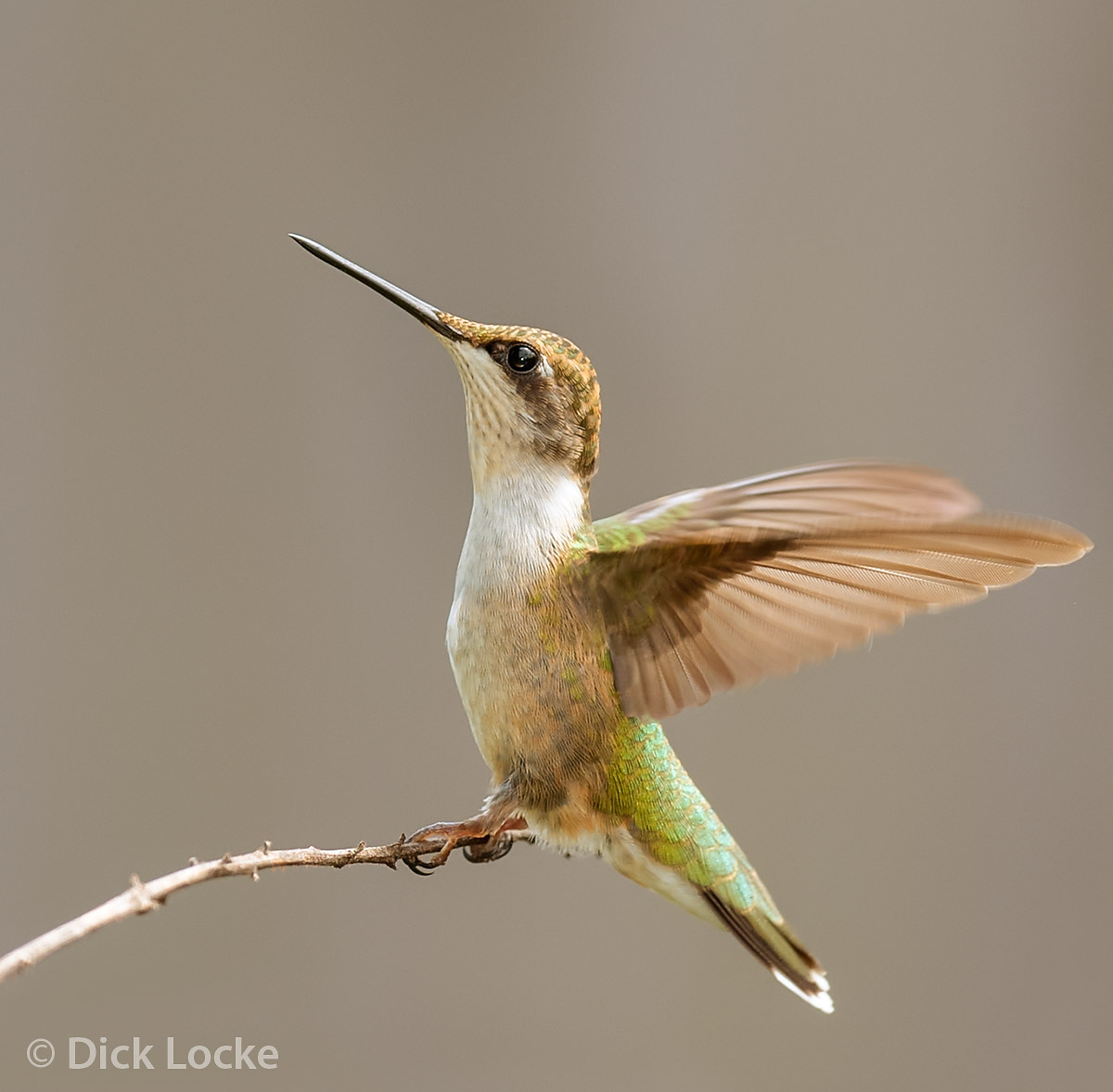 He's one of the 4 or so contenders noisily battling for the backyard turf. This is his "I'm a tough guy" look. Ruby-throated hummingbird from near The Woodlands August 21, 2016. 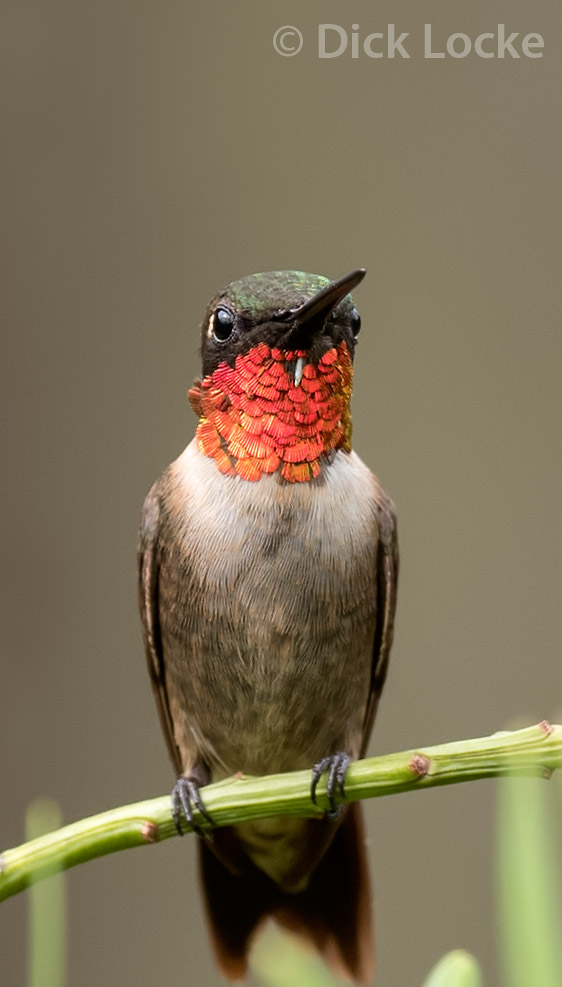 August 2016.  The red iridescence is from light interacting with the feathers, not pigment. 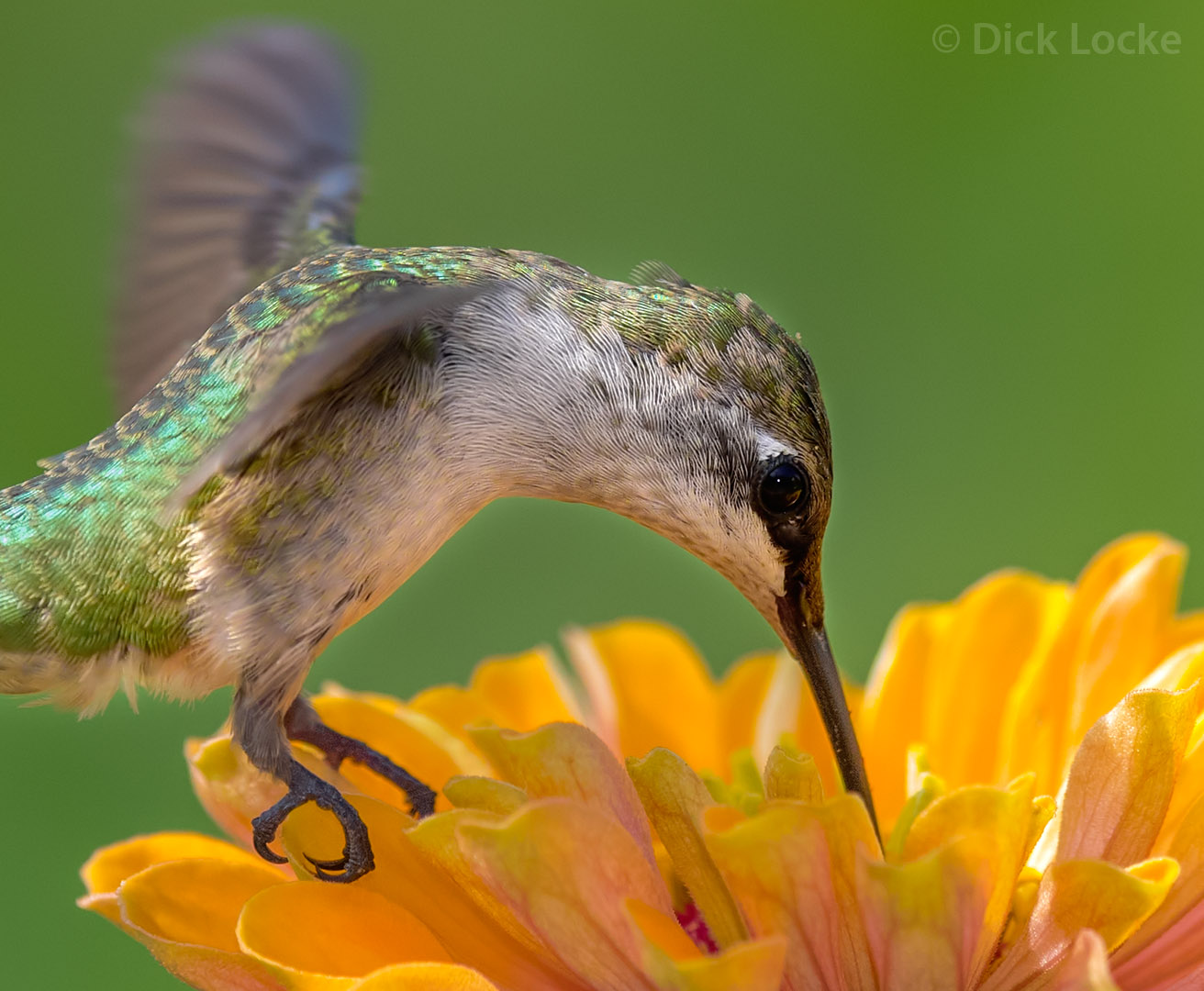 Super-close shot of a hummer dining on one of our many zinnia flowers, July 2017. 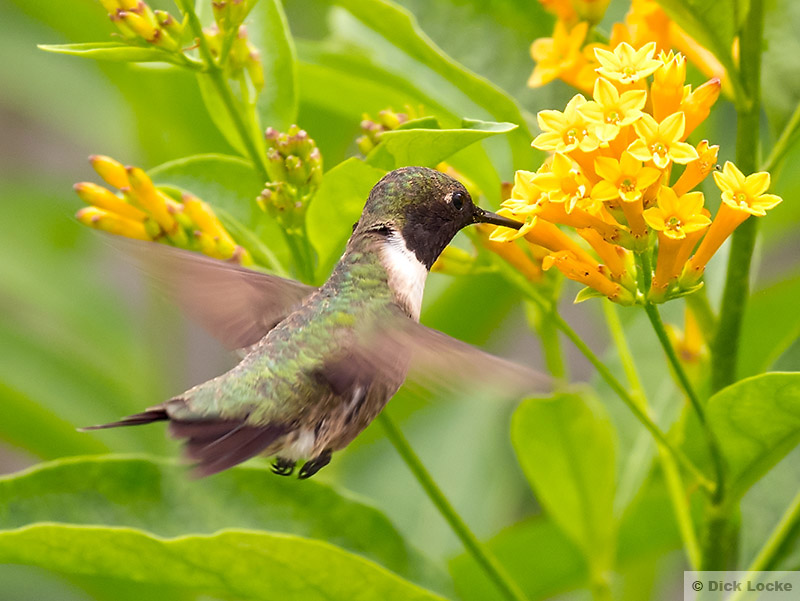 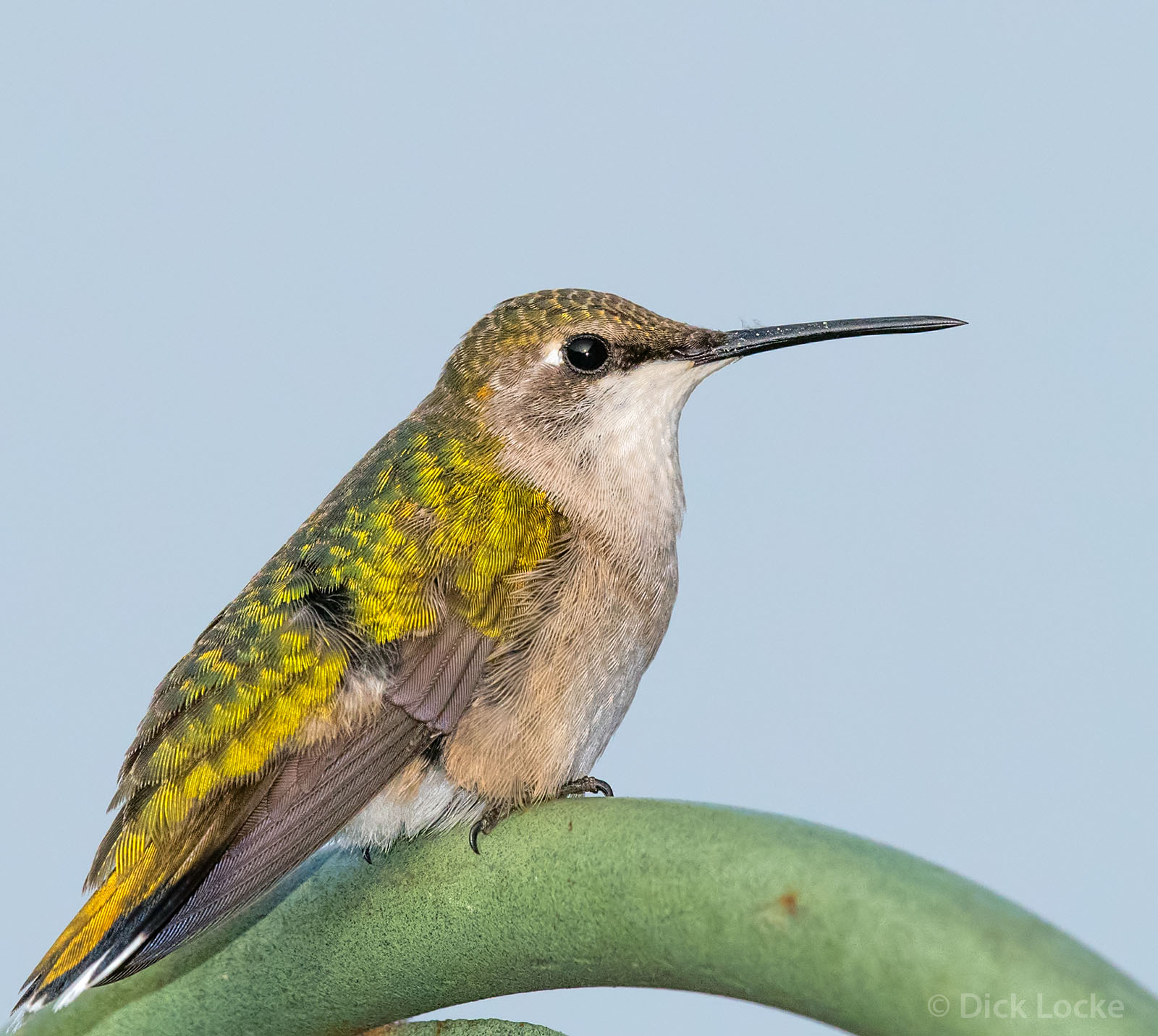 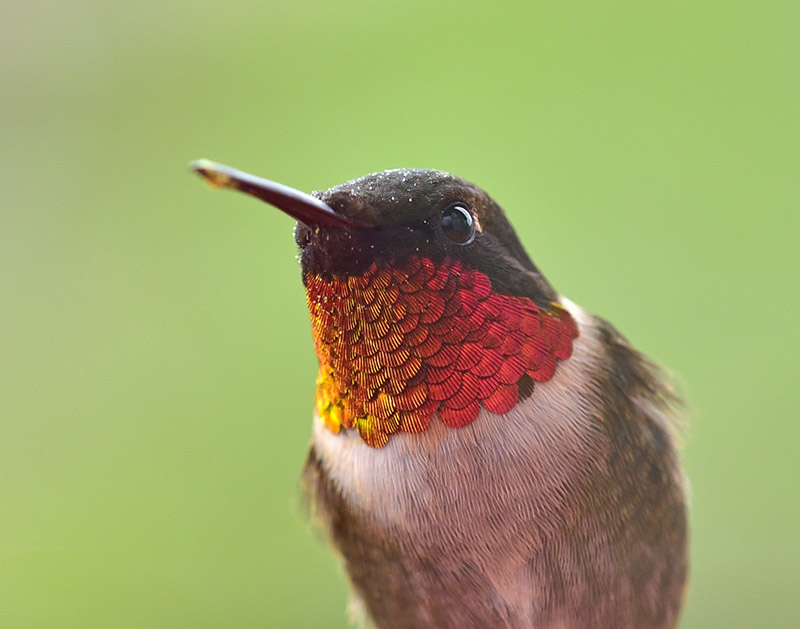 We have feeders just outside our back window and if I'm careful and lucky I can get some close-ups through the glass. Notice the pollen grains on his head.  April 8, 2015 with the Nikon D750 camera and 200mm f4/D "micro" lens; f8, 1/250s (pretty slow for that focal length), ISO 800.  Backyard pictures here. 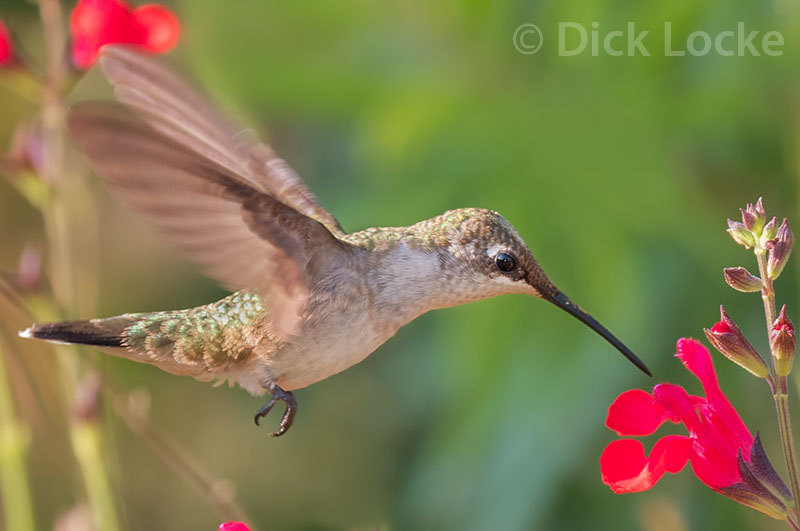 This is most likely a female Ruby-throated Hummingbird in the back yard July 2016. She's working the salvia greggi (aka Autumn sage) in our backyard. 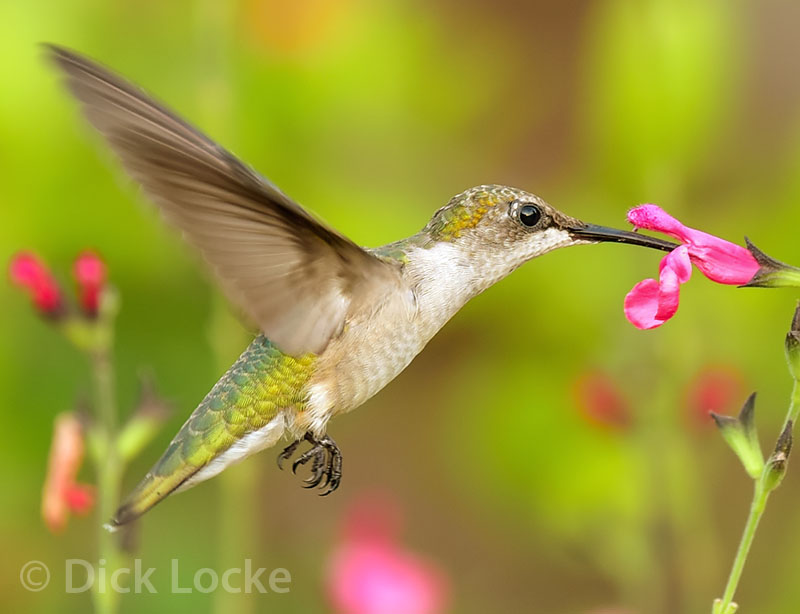 The above was shot late in the day and is processed to enhance warm and gold colors, where the one above is a bit cooler.  I'm guessing the above are both female Ruby-throated Hummingbirds; they are from the backyard July 1 2016.  Perhaps she's not going to migrate? 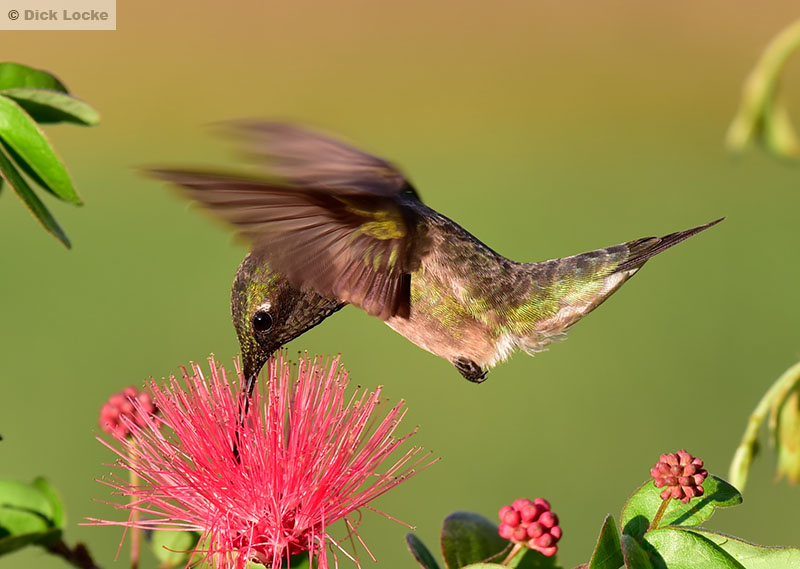 Hummingbird in the front yard, late in the day with natural light. 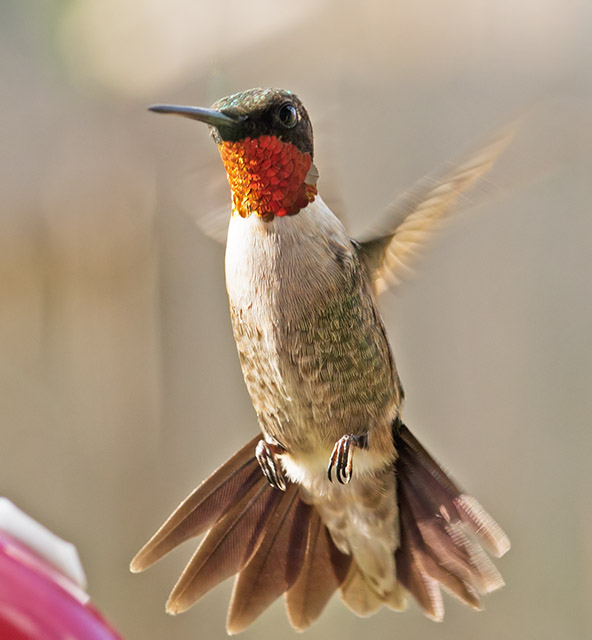 This is from 2013.  Shirley got us a hummingbird feeder and it's attached to the back window.  If I'm careful I can photograph the birds through the glass and get close enough to use my awesome Nikon AF 105mm f2.8 macro lens (Ken Rockwell info on this version of the lens at the link) (though as of 2015 that lens is now in the hands of my brother as I've switched the the 105mm VR & 200mm lenses for macro).  The window faces south, so morning or evening light is needed to avoid shooting them back-lit.  We have at least 4 birds competing for the feeder; this is the only mature male.  I'm using ISO 500 and letting Nikon D7000 camera spot-meter.  I'm also experimenting with center-metering; that may be better for these close-ups where the bird fills a fairly large part of the frame.

There is a bumper crop of hummingbirds this year (Sept 2014).  I'm shooting them through our kitchen windows, you can make out some reflections in the above. 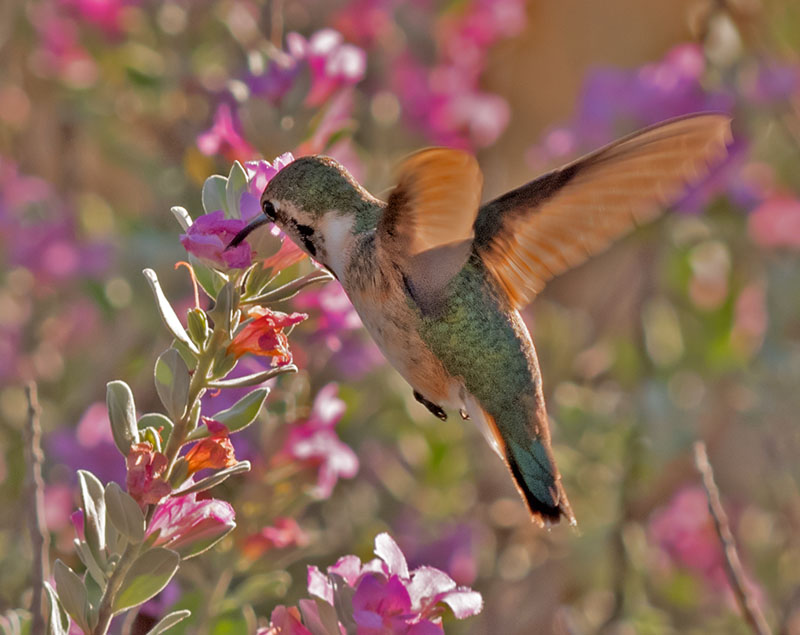 From the West Texas 2015 trip.  Other West Texas Birds are here. This guy showed up while I was shooting bees, not sure of the species.  He was severely back-lit, but with some extreme Photoshopping I was able to end up with this image.

The above was also captured on the 2015 Davis Mountains trip.  Also not sure of the species.