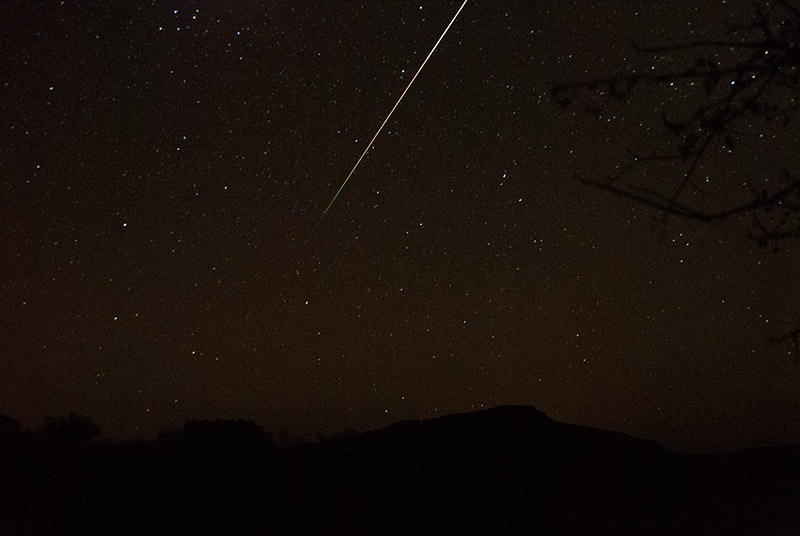 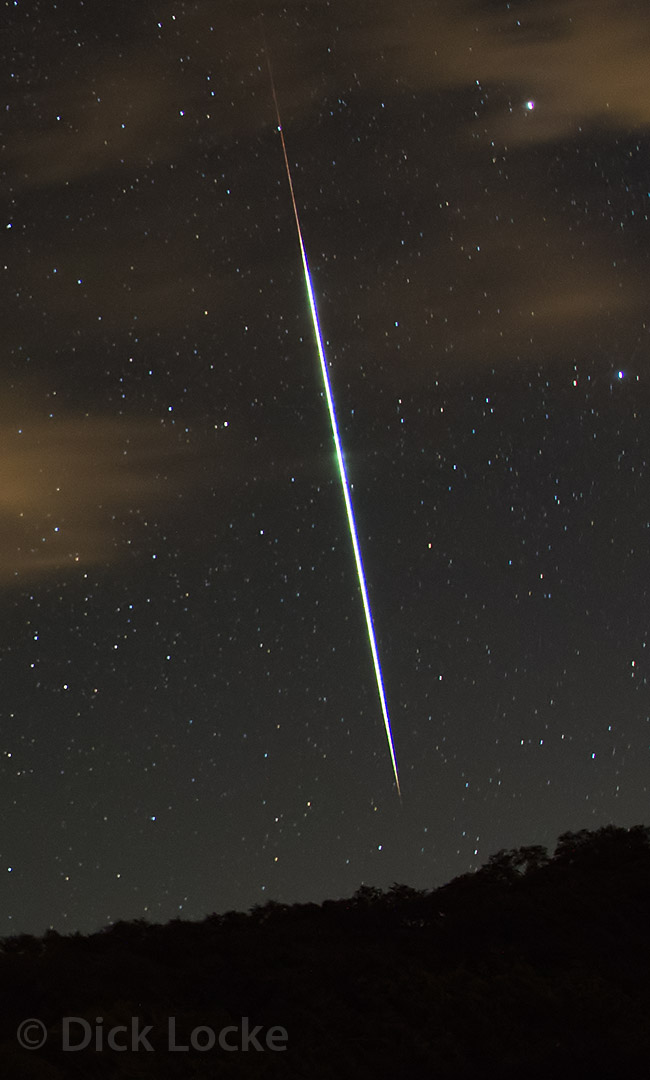 Above is the brightest meteor I've ever captured. It was from 10/1/16 at 1:30 in the morning during our hill country vacation. It's so bright that it washes out most of the color you can sometimes see on these. There's some color on the top as it leads in, then you can see a trace of smoke in the middle. Nikon D7200 and 14-24mm lens doing 30 second exposures for time lapse.

The Leonid Meteor Shower on 11/18/01 was spectacular.  They started after midnight and just kept coming at an increasing rate until dawn (see next paragraph).  Everyone  "ooohed" and "ahhhed" at the great display all morning.  Thanks to all who showed up to share this event.  I'd especially like to thank NHAC members Paul Downing, Kent Francis, and Aaron Clevenson for their company and support.  Paul brought the camp stove allowing me to make some fresh-brewed coffee.  Kent and Paul helped me work through my blown fuse in the  power cord that disabled my STV auto guider.  These three folks, along with the rest of the club members present, helped me stay awake & alert!

Meteor Rate:  NHAC club members informally estimated a meteor rate of (Updated #) 300 or more (probably a lot more) per hour until around 3:30 a.m.  Most of the folks at our club's site starting packing it in around 3:30 to 4:30 central time (in Texas), and I think the rate kept increasing from there until dawn.  (One club member was trying to keep a running count and plans on presenting a report on the meteor rate.)  We had a pretty good view of most of the sky; good but not great transparency, Houston skyglow to the south, and some thin clouds  around the horizon.   When I was packing up my scope around 4:45 I was guaranteed to see several meteors if I paused and looked up for even a few seconds.  I even saw 4 to 5 very bright meteors on the western horizon as I drove home at dawn.  I would have no trouble believing 1000 to 2000 per hour or more at the peak from dark skies for this shower/storm.

And one more higher resolution view
Leonid in the Big Dipper by Kent Francis, NHAC
Check out the North Houston Astronomy Club Home Page
Go to my Astronomy Images page

Sometimes satellites impersonate meteors as with this example in Perseus.

Notes:
1) I had a question about the exposure time for this shot.  In general, I was shooting 5 minutes exposures on 2 cameras (mounted to my telescope so as to track the sky).  Whenever I though I might have "got a good one" I'd close the shutter, which is what happened with this shot.  I'd estimate a 150 +/- 30 sec. exposure for this shot.
2) I also had a question about what causes the color change.  Robert Reeves (reeves10@swbell.net, www.robertreeves.com), author of Wide-Field Astrophotography, provided the following response:

The colors you recorded are the same as the ones I got in a Leonid in 1998. See  http://www.robertreeves.com/leonid3.jpg  I think that was a pivotal year when film technology got good enough to record the actual colors of a meteor's trail.  Dr. Donald Olson (the same guy who does the archeoastronomy articles in Sky and Tel) became fascinated by the colors in my 1998 photo and did some study of it.  He concluded the changes in color, the change from green to red as the meteor plunged deeper into the atmosphere, was due to the reactions with different gasses ionizing in the upper atmosphere in a similar way the aurorae displays different colors at different altitudes. 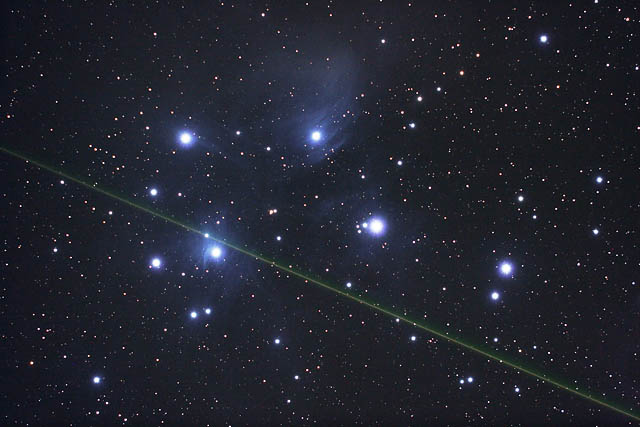